Destiny 2 Ends Season of the Worthy With a Big Bang

While most of the talk around Destiny 2 has been around the Fall expansion and the arrival of the Darkness (after seven years no less!), many people may have forgotten that the current season had a more immediate threat.

For those who took a break from Destiny or generally weren’t aware, the Cabal made one last ditch effort to destroy a place called The Tower, basically the player’s home hub. Their plan was to repurpose the warship known as the Almighty, a sun destroying megaship that players essentially fought Ghaul on in the vanilla campaign, and send it crashing down into the social space. 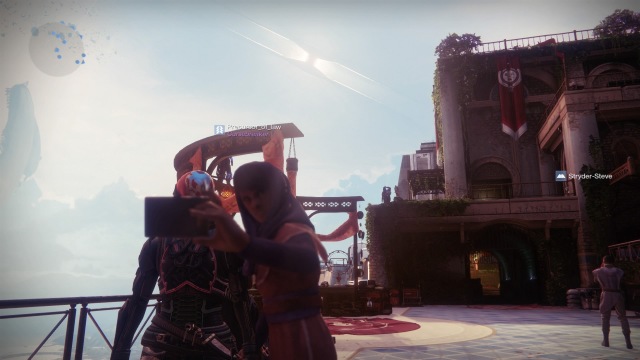 All season, players wondered what the payoff would be for this story line. While the content portion of the season wasn’t really regarded well by players, the Almighty was seemingly lost behind the emerging threat of the Darkness which players could keep track of in the Rasputin bunkers each week. It wouldn’t be until the final two weeks that the Almighty would again begin to join the conversation.

The ship would progressively get larger in the Tower’s sky box each reset, finally becoming the threat that players were told it was at the start of the season. During the final week of the season, word started to come out that Bungie was planning a live event, then confirmed by the studio a day before it was scheduled to happen. Saturday, June 6 at 1pm ET. Reset time.

While most people probably thought would happen is that they’d log in and see some sort of trailer or cinematic showing Rasputin taking out the Cabal ship. I mean, Bungie wasn’t going for a Fortnite style live event right?

Dead. Wrong. I want to give major props to Bungie for defying fan expectations and actually pulling off something of this scale. I personally didn’t think they could do it mainly because the technology and game engine is aging at this point and just isn’t quite as flexible as what Epic has in the Unreal Engine. Not only that, there’s a global pandemic going on forcing everyone to work from home, adding another hurdle to this.

If this is the route Destiny 2 is going in, then I’m in. Seeing things happen in real time rather than reading text about it from an NPC or getting a trailer was really cool. Not only that, seeing the community come together and occupy the Tower to see what was going to happen was pretty great. Plus, the changed the positions of all the characters in the Tower so that they’d either be facing the Almighty or looking terrified at what was happening. Another nice touch.

Now, the event itself wasn’t perfect. In fact, the one major problem it has was that it was much too long. Bungie told everyone to be logged in to the Tower by 1pm ET. While that was fine enough, the event itself didn’t really get going until after 1:30, over half an hour after the start time. I don’t know if this was a technical issue or a buffer to allow other people not to miss it but if you give people a time, stick to it. If people are late, it’s on them.

Not only that, the whole event itself played out way too slowly. As the ship approached, Rasputin’s lasers or missiles attacked it from above and below. However, the missile strikes approached the ship at incredibly slow speeds. If you logged in an hour later at 2pm you really wouldn’t have missed much. As they struck the ship, players could see the tiny explosions that again continued for what felt like 15-20 minutes.

The payoff wouldn’t come until closer to 2:30 PM when finally the ship’s core erupted and the thing burst into flames. Debris started to splinter off as a large hunk even struck part of the Tower, leading to many memes that another 30 feet to the left would have taking out the Eververse Microtransaction store. The burning husk continued to fall until it smashed into the mountains at the back of the social space.

Thanks to your efforts, Rasputin's full power was on display and saved Earth from certain doom.

So yeah, it was cool to see this play out in real time, but the major issue here is that it took an hour and a half to actually happen. The event itself should have been like 10-15 minutes tops. Again, this may have been a technical limitation or just the first step in a process that the team will learn from. Many people can’t sit in front of their TV for an hour and a half waiting for something to happen on a weekend during the middle of the day.

With the Shadowkeep expansion, Bungie had mentioned that it wanted to create this evolving world. While we had seen elements of that through the Vex Gate that was slowly created throughout season 8 and then the return of Saint-14 in season 9, I don’t think anyone had a clue that live events would be something on the table for the studio.

I hope Bungie tries this again, just with a few tweaks. While their cutscenes are absolutely well made, seeing this major events play out was pretty cool. It may not rival what Fortnite can do, but I absolutely appreciate what Bungie is trying to do with its game to keep it fresh heading into Year 4.