Ghost of Tsushima: Beyond Sold

It’s fair to say that I’ve been on board with Ghost of Tsushima from day one of its announcement. For me, two things really did it for me.

The first thing was that it is being done by Sucker Punch, a developer I’ve really come to love from the PS3 and beyond days. The other element was that fact that while Ghost is really unlike anything the studio has done before, the foundations of it are built on the actual historical event when the Mongols invaded Tsushima Island. I’m a sucker for games that let me play around inside of actual historical based events.

At this point, it seems my blind devotion has largely paid off as the recent trailers and announcements have all looked fantastic. However, it was last week’s State of Play presentation that simply sealed the deal.

Seriously, if you haven’t watched it yet, check it out. It’s 18 minutes long but it’s very much worth your time. Go ahead, I’ll wait.

Sony, that is absolutely how you show off a game, thank you. What I love about this presentation is the fact that the developers really let the game speak for itself. Much of the gameplay has very light commentary or simply none at all, which really lets you absorb everything happening on screen.

Gameplay, as expected, lets you approach situations the way you want. You can go full on berserker mode and basically slice and dice your way through the game as a heavily armored Samurai, take on the mantle of the ghost and use trickery and stealth to clear our camps, or go for a mix of the two. It’s exactly what I was hoping for.

The thing that really stood out to me however was the unbelievable photo mode. Granted, I should have seen this coming considering the photo mode that was added to inFAMOUS: Second Son and First Light, but what Sucker Punch did for Ghost of Tsushima takes things a big step forward.

As seen in the trailer, players have a ton of options when playing around in photo mode. So yes, you have the traditional options like depth of field, color grading, and more. Sucker Punch has also added new options that let you customize Jin’s emotion, controlling the wind direction and speed, as well as adding and changing the particles in the shot like leaves, fireflies, or flowers. 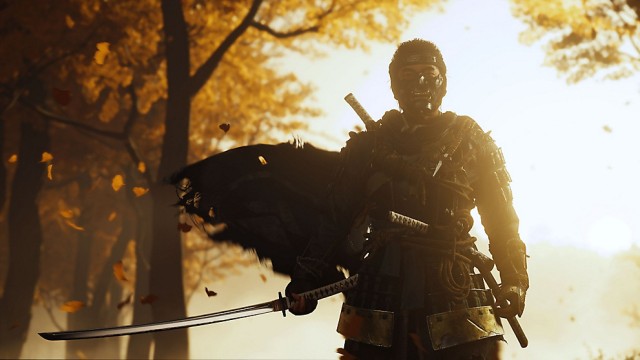 However, photo mode can also be used to make stunning videos as you can set a musical theme to be playing and still have full control over the camera as it’s recording. The video shows off a few examples and it already has my brain swirling with ideas. I personally can’t wait to see what the community comes up with using this tool.

Sucker Punch also showed off a Japanese voice track that can be enabled to really emerge yourself. If you want to take that a step further, you can enable Samurai Cinema mode, which basically turns the game into a classic Samurai movie. Black and white filter, film grain, and wind effect. It’s super cool and a wonderful extra, but I probably won’t be using it as much as part of what makes this game special is the gorgeous colors and landscape.

And that’s really just the tip of the iceberg in this video. All of this just looks amazing and I can’t wait to get my hands on the game, even if it is a few weeks later than what we originally thought. Let me know what you thought of this showcase in the comments below.