Well friends, lately my gaming time and attention has been solely focused on Destiny 2, a fact that I’ve gone over before. However, as I’ve nearly caught up on all Annual Pass content and have finished one set of Solstice armor for my Hunter (halfway done with my Warlock set), I’ve begun to check out some games that have been buried in my backlog.

Namely indie games. There’s still plenty I’m looking to get to (like the meaty Moonlighter DLC which just came out a few weeks ago), I wanted to provide some thoughts on the games I’ve been able to try out.

So without further adieu, here are some of the smaller games I’ve been playing recently:

T.A.B.S. (Totally Accurate Battle Simulator) – I’ve been aware of this one for a while, having seen a number of YouTube channels I follow play it at various times. Thanks to the Summer Sale, I finally jumped on board and it’s as wacky and wild as I figured. 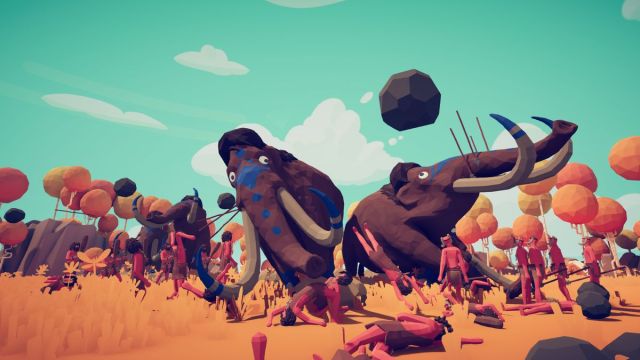 Basically, it’s a game with low polygon style people with googly eyes that you can set up to battle another group of people. There are different eras with their own special troops like farmers with pitchforks, knights, archers, woolly mammoths, and a ton more. Each one has a specific cost, so part of the fun is figuring out which units can overcome the other team. There is a campaign, but it’s kind of like individual challenges that you can beat with cost and era restrictions which add some tactical decisions.

What’s cool is you also have the option to take control of individual units, but ultimately it’s a set it and watch what happens sort of experience. If you ever played with action figures as a kid or wondered if a Valkyrie could defeat a pack of halflings, then this game is totally worth checking out.

The Outer Wilds – Oh boy, this was a tough one. I really wanted to enjoy this game but I just really couldn’t get into it.

So this is an adventure game where you play an alien astronaut. There’s a mysterious event that happens in this system, part of the story which is best left discovered to be honest. Part of your crew is out exploring the various celestial bodies, which you can visit and explore.

On paper, it sounds great. The world is atmospheric, the music is perfectly mixed in as it subtly comes in at specific times or if you’re interacting with something in the world, and there’s a hint of a mystery brewing.

Ultimately though, the experience left me cold and somewhat bored if I’m being honest. It’s similar to a game like No Man’s Sky, where it really just wants you to explore on your own with almost zero hand holding. Plus, it’s an adventure game, so don’t expect anything like crafting, inventory management, loot, gear, etc. I just couldn’t get into it. Plus, not knowing where to go or why was another hindrance I just didn’t like. I need some direction or reason for going somewhere.

Part of the struggle is also that the controls didn’t feel great and were a little clunky. I mean, to jump I had to HOLD the button, not just press it like in nearly every other game. Moving the spaceship around, especially trying to land on things was pretty complex and not intuitive at all.

I don’t know, maybe I’ll give this one another chance at some point down the road. Perhaps I just wasn’t in the mindset for an experience like this. We’ll see.

They Are Billions – This is another game I discovered online and being someone who loves RTS style games, I was naturally pulled in. Thankfully, the fine folks at Evolve PR provided me with a key for the console version of the game which just recently launched.

So this game puts you into a Steampunk inspired world that has basically been overrun by zombies. It’s up to you to rebuild society and avoid being overrun by the growing surge of undead.

Pretty cool setup and I’ve already seen part of the campaign form those on PC. Excited to drop in, imagine my surprise to learn that the console game is actually completely limited in the content that’s available. The campaign is completely missing, instead only featuring a Survival mode and weekly challenges. The problem here is that the Survival mode assumes you already know what you’re doing, what each unit can do, what structures to place, etc etc. As a new player, I don’t. I was overwhelmed and completely confused on how to properly build structures efficiently. There’s no training or tutorial, which was very disappointing.

I still really like the game, but I’m going to put it to the side for now until the rest of the game is added in a future update. If you’re jonesing to play this, pick it up on PC for now.

Bloodstained: Ritual of the Night – I spoke about this one a bit in my First Half of 2019 Awards post so go there to check out my full thoughts on it. Needless to say, everything I said about it remains true and the game continues to get better the more time I spend with it.

The Messenger – Another title I’ve spoken about in the past, this game really surprised me. I thought I knew all about it, but near the halfway point, it completely flips the script in a move I didn’t see coming.

So the first half of the game is spent more in a traditional side scrolling action game. You go from mission to mission, typically fighting a boss at the end. It has major Ninja Gaiden inspiration going on, though its a bit more accessible than that classic NES game ever was. You also have new skills and abilities you can acquire and the writing is top notch. However, you reach a point against an enemy that you think is the end of the game. It’s not.

Instead the full map opens up and the experience moves closer to a classic Metroidvania style experience where the individual levels are now linked and you can move freely through them to look for powerups and other items to advance the story. It retains the same great action elements, but with a huge open map and the ability to “time travel” (through incredibly cool NES vs Genesis style graphics), the game goes to a completely new level. Highly recommended, even if I haven’t quite played it yet.

Wargroove – One of the more recent games I’ve played, it immediately reminded me of games like Advance Wars, a fact that I love. Instead of tanks and guns, Wargroove is more Medieval in focus with swords and magic. You move around on a grid, capture bases, and use Hero units and their abilities to win the day. If you miss the good old days of Advance Wars, Wargroove is worth checking out.