The Promise and Potential of Tom Clancy’s The Division 2

This past weekend, I was able to jump into The Division 2’s private beta. Now, many of you may already know that I was a big fan of the first game, and was even pulled back into the experience after 6+ months away from it.

Part of the reason why it was easy to come back was due to the tireless work of Massive Entertainment, the studio behind these games. The team continued to plug away at the game, releasing huge updates which not only overhauled and fixed things that players didn’t like but also added swaths of new content and zones, like the West Side Piers.

That level of dedication and care to keep improving the user experience seems to have carried over into the sequel. Based on what we heard at E3 2018, The Division 2 looks to be a big step up over the first game, correcting many of the things that were found lacking at launch. This private beta would be the first time that many players could get a taste of that promise, including a look at some of the end game material like Invaded Missions, PvP conflict, and the completely renovated Dark Zone…or zones in this case.

The beta was absolutely massive, especially when compared to the recent Anthem demo, so let’s get to talking about what worked and what didn’t for The Division 2’s private beta.

First and foremost, let’s talk about the setting. Picking up months after the first game, the scene has shifted south to the nation’s capital at Washington, DC. Part of the appeal of the first game was its setting, walking through the urban jungle of New York City all decked out in holiday and Christmas decor, since the virus took hold on Black Friday. Without that element, I was worried that The Division 2 would lose some of its charm.

Thankfully, I didn’t find that to be the case. The Division 2 looks a bit better (visually) than its predecessor, though I think part of that is because the game is able to play with more environments and color. Washington, DC has a lot more greenery going for it, and while there are still sections that remind you of being a tiny speck surrounded by massive buildings, The Division 2 manages to break that up with different areas and sights to see.

Deer run around the streets and plant life is starting to thrive. Honestly, it’s a bit startling at first to see so much color and a reduction of the gritty browns, tans, and greys that were prevalent within its predecessor. That’s a good thing because The Division 2 now features a dedicated Photo Mode. I personally can’t wait to see what the community comes up with.

The beta opens with a bang, tasking you with charging up the front lawn of the White House, which is currently under siege from a new faction called the Hyenas. This group really lives up to its name, preying on the weak and taking whatever they want. It’s a tense and fun battle that ultimately opens the White House as your new base of operations.

One of my favorite elements from the first game is the upgrade process for the base of operations and seeing it evolve over the course of the story. Massive has taken that concept and absolutely expanded it tenfold. While much of it was locked, you were still able to take part in projects, speak to vendors, and recruit NPCs which further open up new functionality like crafting. Plus, as new areas open, the White House visually changes as it becomes less cluttered and more structured.

The world seems to have a lot more to do in the game outside of the Story and Side missions. Settlements can be unlocked, acting as a smaller version of the Base of Operations. Starting small at first, players can continue to upgrade these settlements and gain bonuses, though for me, being able to have more things that can be upgraded over time made me very happy. Safe houses are still around, though there seem to be less than before thanks to the Settlements.

Unlocking these players also play into a new progression style system called Projects. On a basic level, these are upgrades that players can unlock by completing various objectives. These could be as simple as supplying the settlement with ‘X’ number of materials, defeating various enemies in a particular zone, resupplying friendly factions walking the streets, and other simple mechanics. In exchange, you open up new areas of the settlement, such as a game room for kids, as well as important items like BLueprints for crafting. Projects are a simple addition but they go a long way to investing the player in the world as well as requiring them to interact with it. 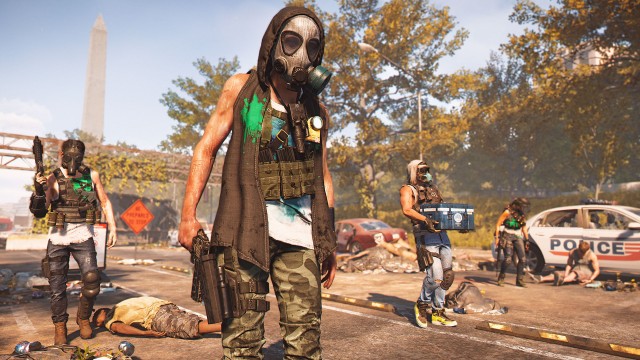 Gameplay wise, it’s still that third person cover shooter you remember. Gunplay feels good, and you’ll be finding plenty of loot during your sessions. Shields have been made more important this time around and once broken, your health drops insanely fast. Instead of using health kits, players recharge their shields.

Skills were limited to the newly added Drone and the returning turret and seeker mine. While the Seeker acted as you’d expect, the turret also had an alternate mortar mode which basically let you call down mini-explosions onto targeted areas. For me though, the drone was my personal favorite. Its default state acted as a shield recharger, though you could also unlock an aerial bombardment version instead. Personally, the bombardment was a cool idea, but it felt a little finicky in execution. I’ll have to play it a bit more to fully understand how it works, I think.

Players can acquire SHD tech and use it to unlock passive perks which cover a wide range of important bonuses. These cover things like being able to hold more shield packs or grenades, unlocking a secondary weapon slot, and more. Better yet, these perks can be upgraded multiple times, though, with each level, the SHD Tech cost rises. The Dark Zone has its own set of perks as well, but I didn’t have much time to really dig through them.

Once all beta story missions have been completed (traditional Division style affairs really), the game gives you three pre-made max level characters in order to try out end game material. The three specialized characters were the same three introduced at E3 last year including the Demolitionist, Survivalist, and Sharpshooter. I opted for the Demolitionist, the guy sporting a massive grenade launcher, a special weapon that essentially replaces the signature skills from the first game.

Since these characters were pre-made, they came with default high-end gear. I wasn’t thrilled with the look of the backpack, which was massive and made my character look like he was carrying a Ghostbusters proton pack on his back. Being a loot shooter, I’m fairly certain there will be plenty of options by this point, so I’m not too worried.

Upon loading in, you’re immediately invited to dive into an Invaded Mission. This is basically a remixed version of one of the first story missions where the Hyenas are replaced with a paramilitary group called the Black Tusks. These guys are no joke as they use tech, healers, jammers, and all sorts of things to throw you off balance. It was a fun, but tough challenge that my squad and I eventually made it through. It was tough but fair.

Thankfully, every mission has access to matchmaking, which is always a good thing. Unfortunately, the game alerted me (what seemed to be every 2 minutes) that another agent was requesting backup. I’m sure there was a setting to turn notifications off, but I didn’t bother looking. Hopefully, it’s there in the settings because while I love that there’s matchmaking available, I don’t need a reminder of it every 5 seconds.

Unfortunately, I didn’t have time to try everything. On paper, I like the updated mechanics of the Dark Zone and while it’s still a risk to go into, you can find gear that doesn’t need to be extracted and therefore won’t be lost if you die. It’s also split into three zones instead of occupying the big center area of the map. Each one is designed a bit differently and they all have an intro mission to get players familiar, which I think is great. There are new Rogue Agent levels and an occasional event which makes one of the three Occupied, which turns the zone into a hardcore and ruthless area.

I also missed out on the PvP side, something I never really got into with the first game. Part of the problem with the first Division is that is was added post-launch in a paid expansion, making it locked off from those who didn’t first purchase it. Thankfully, that’s rectified this time around as it launches for everyone inside the base game. For Free. The 4v4 combat looks interesting at least, so I’m somewhat interested in actually trying it out this time around.

Ultimately, I was very impressed with the beta. Yes, it has some technical issues on the first and second day with disconnects, but the actual gameplay was very smooth whether solo or with other players. If you were a fan of the first game, this one appears to be a no brainer. For those of you who didn’t care much for the first one, I’d recommend giving this one a look as it improves upon its predecessor in nearly every way. You can definitely see a fuller experience here that the first one was lacking at launch. It’s always nice to see a developer learn from their past experience.

Thankfully, everyone’s going to get a chance to try things out when an open beta session launches in March.