We have it so easy these days when learning about new games thanks in large part to the internet. From videos, websites, and social media, we consume information at a rapid pace. Believe it or not, it wasn’t always like this.

Super Smash Bros, for me, was one of those games that just seemingly appeared out of nowhere. The original game that started it all arrived in 1999, long before the huge marketing budgets, YouTube videos, and social media information blitzes became what they are today. It was very easy for a game to launch without the masses knowing and that’s kind of what this game did for me. 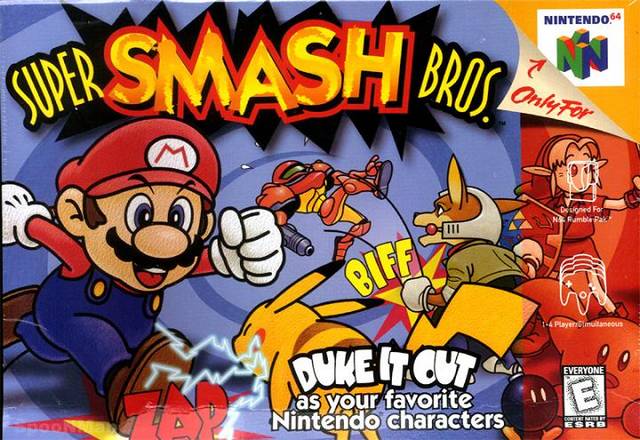 I can remember bumping into it on a store shelf at Toys ‘r’ Us, not knowing what I was looking at. The box depicted a cartoony looking Mario fighting an equally cartoony looking Pikachu with Fox McCloud punching Samus Aran in the background. Kirby was, of course, hamming it up for the camera, while Link stood confused as if his sword suddenly turned into a bouquet of flowers.

Why were these beloved Nintendo characters suddenly mad at one another and fighting each other? I had to find out.

It was such a different game from anything else that was available and it was downright fun. Granted, pairing a fighting game that used Nintendo characters as the combatants was simply unthinkable at the time.

In true Nintendo fashion, they simply didn’t follow the traditional fighting game rules. Gone were the health meters, replaced with percentages that got bigger and redder the more damage your character took until someone was shot off the screen completely. There were no complex Street Fighter-esque combos or controls for each character to memorize either as the same scheme worked across all 12 fighters. The story was basically an arcade-style mode that ended with your character fighting a giant white-gloved hand. In an interesting twist, victory sent your character back to the toybox as if all this fighting was simply a fever dream of a Nintendo style doll.

It’s also kinda funny to take a look at not only the limited number of things to do in the game but also the size of the original roster, which is minuscule as compared to how spoiled we’ve gotten in recent games. Granted, I’m sure the original game pushed the technical limits of the Nintendo 64 pretty hard so there likely wasn’t a ton of space left over for more stuff.

Visually, the game doesn’t hold up well at all, but that core gameplay loop is still massively satisfying. It’s crazy to think how this franchise has evolved over time, especially with the latest iteration just a few days away.

Super Smash Bros Ultimate is the culmination of the franchise, putting together a package with the most content I think I’ve ever seen put into a game. In this day and age where DLC and microtransactions are common place, what Nintendo has done with this is not only insane but really, really customer friendly.

I can’t wait to “duke it out” once again as my favorite Nintendo (and non-Nintendo!) characters this Friday.

This entry was posted in Opinion and tagged games, Nintendo, Nintendo Switch, Opinion. Bookmark the permalink.

5 Responses to Looking Back: Super Smash Bros for Nintendo 64