Doing a bit of digging, I also found out that the studio behind the game is basically made up of former Evolution Studios members, the group behind Sony’s old Motorstorm franchise as well as DriveClub. Codemasters, another well versed racing company, scooped the team up after Sony closed the studio and gave them a new place to call home. That’s another game franchise that I loved so Onrush seemed like a safe bet.

Unfortunately, for me, the game kinda got lost in the shuffle due to E3, my vacations, and life in general. Based on sales numbers so far, it appears that I wasn’t the only one with this problem. This past weekend, the game re-entered my stream of consciousness thanks to a free weekend event on Xbox One, giving me an opportunity to essentially try before I buy.

So, was I enamored by the arcade action of Onrush? Read on to find out…

Presentation-wise, Onrush does not stray away from color like the original Motorstorm did. Sure, the tracks are all outdoors, but you’re getting much more than the tans and browns of old. If I had to describe it, Onrush employs an almost nightclub like atmosphere with bright colors, lush environments, and the various vehicles themselves. It’s a beautiful game to look at, even when you’re moving through it at a breakneck pace, and the game knows it. I stumbled into a photo mode and naturally, I had to play around with it.

Gameplay-wise, Onrush is actually refreshingly different from what you’d expect. The most surprising element is that you don’t actually race at all.

…I’ll let that sink in for a moment…

Yes, Onrush is a racing game where you don’t race. Here’s where the Mad Max portion of the article’s title comes in. The game comes with a bunch of different objective based modes, but the core gameplay loop involves combat racing similar to what you’d find during the car segments of Mad Max: Fury Road. Drive fast, smash your enemies, take risks, and boost! 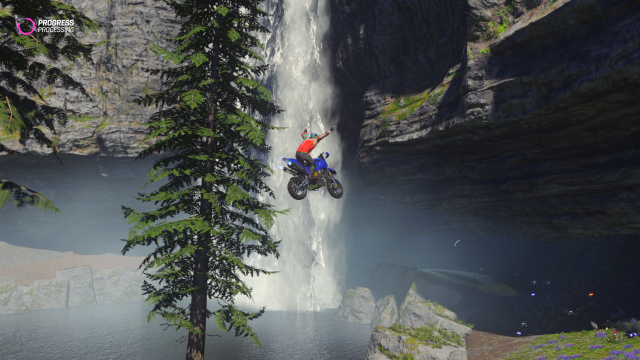 The cars themselves act more like character classes than anything else as well. The 8 vehicle types range from the small and nimble motorcycles to the hefty hummer like SUVs. Each class of vehicle has abilities such as gaining boost for driving close to enemies or performing take downs. What’s better is they all race together on the track which naturally leads to plenty of action and chaotic moments. Add in the fact that there are neutral fodder vehicles which are part of the stampede and really only there to be crushed.

Each car has an ultimate ability called Rush which propels the car forward at ridiculous speeds and has some sort of effect. Certain rushes may drain the boost of nearby enemies, drop barricades that slow down enemy racers, or turn the car into a near indestructible battering ram. Each car feels different and helps to keep the racing exciting.

I will say that the car designs, especially at the beginning before you start unlocking better skins, aren’t all that impressive. For the most part, you’ll be driving more extreme system vehicles so if you’re expecting realistic, Forza style cars, you’ll be disappointed. Even some of the low end liveries (skins) feel a little generic, though you’ll unlock more interesting stuff the longer you play. 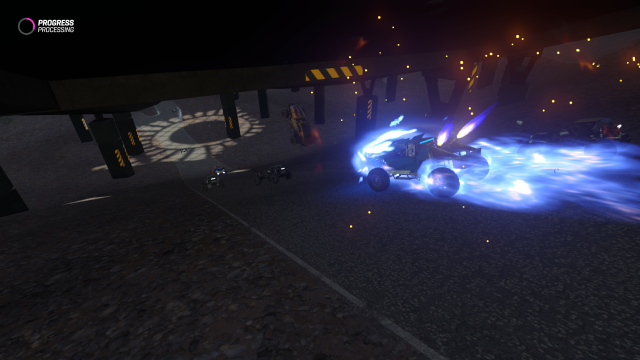 Customization also extends to the drivers you can pick from. While purely cosmetic, each driver has different colors, skins, and even a alternate look that can be unlocked through a loot crate system. This isn’t pay to win however, as you can spend money on unlocking new crates. You get a new crate for gaining a new level, which seems to happen fairly often, so I constantly felt like I was unlocking new things at a quick pace.

As a team based racing game, I found most of the modes to be pretty fun, though some are better than others. In Overdrive, teams score points by boosting and driving dangerously, where the first to the target score wins. Countdown features a timer that ticks down, while teams race through checkpoints to earn a few more seconds and avoid missing it or crashing. Lockdown is an interesting take on King of the Hill as both teams race to try and capture a constantly moving zone. Switch is similar to Gun Game in first person shooters, though after crashing, 1 life is deducted from the team pool and the player has to pick a new vehicle class in a higher tier. 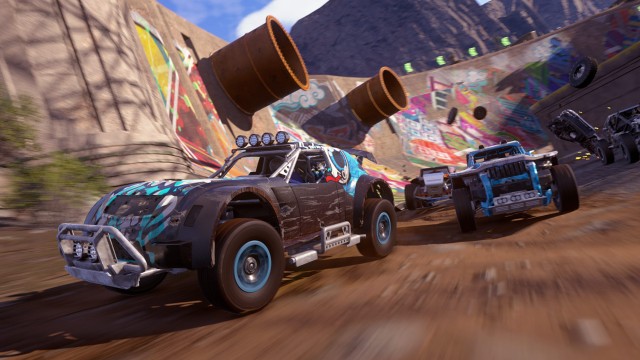 The single player campaign does a good job introducing these modes and keeping them feel fresh through a career progression and tournaments.

A special mention needs to be said about the music, which is almost like a live DJ is scratching to what’s happening on the screen. The adrenaline filled music fits the theme and presentation perfectly and other vocal samples are subtlety layered in when various actions happen such as crashing or if a team is about to win a round. It’s fantastic.

So if you couldn’t tell, the free trial totally hooked me to the point where I went out the next day to pick up a copy. I haven’t actually tried the game out online yet, but it’s on my list of things to do. For now, I’m enjoying my time through the campaign mode and how it’s actually managed to pull me away from Destiny 2 during a major limited event like Solstice of Heroes. That has to say something, right?

If you’re looking for a fast and fun arcade racer that changes the expectations of what a racing game is supposed to be, then Onrush shouldn’t be missed.