Tom Clancy’s The Division Shield Guide: What They Are and How To Complete Them

After The Division 2’s mega reveal at E3 courtesy of Microsoft and Ubisoft, Tom Clancy’s The Division is enjoying a sort of renaissance. As I’ve previously mentioned, I love what Ubisoft has been doing with the game, continuing support for it by adding in fixes, enhancements, and plenty of free content. 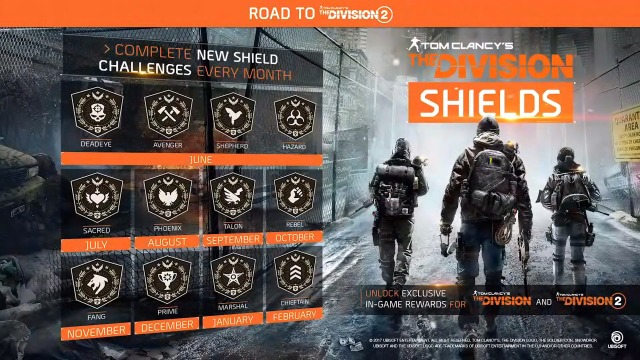 That support, along with obvious excitement for the sequel, is what is helping to keep the current game alive, along with a new system called Shields. Introduced back in June, Shields is Ubisoft’s way of adding a quasi-Moments of Triumph (Destiny reference) for players. Each shield features some sort of long-term objective which can be completed and turned in for rewards. Better yet, players get rewards for the current game and content for The Division 2 as well.

After launching the initial four in June, Ubisoft has slowed the release cycle way down, opting to launch 1 new shield each month until The Division 2 launches in March.

To help you get the most out of this Shield system, and even push through some of the more tedious ones, I’ve started creating video guides detailing each one and offering a few tips and tricks as well which you can find below.

PROTIP! Make sure to bookmark this page as I plan on keeping it updated as each new shield launches over the coming months. Enjoy and happy hunting, agents!