Like many people I’m sure, I have a larger than expected backlog of games to get through. It’s the same thing each and every year. Just not enough time in the day to get through everything.  That’s one of the disadvantages of becoming a functional adult human being.

If you read my annual Gamer Crash Awards (catch up with this handy link if you missed anything: HERE), I’m sure you picked up on the fact that some of your favorite games were not represented on any of my lists. As unfortunate as that is, it wasn’t a mistake. I pride myself on only including games that I’ve played during the year because frankly, how can I judge something if I haven’t played it? It wouldn’t make sense and frankly, I don’t want to betray your trust in me.

With December being a light month thanks to the holiday season, I managed to come across enough time to actually play a number of games that missed the cut off date for my awards back in December. If I had a time machine, I’d definitely have some additions to each of the lists.

Unlike previous versions of the Gamer Crash Amended Awards, this year I’m doing something a little different. I’m going to be talking about specific games in general, rather than how I would have changed the various awards. Hopefully, that way you can get a better idea of the game itself and where I felt like the game succeeded.

So without further adieu, here are my award amendments:

Wolfenstein II: The New Colossus
Yes, this is a game that many probably overlooked due to its terrible release window which also featured the likes of Assassin’s Creed Origins, Super Mario Odyssey, and Call of Duty: WW2. What was surprising to me the most about The New Colossus is how invested I became in the story and its characters. Gameplay was mixed for me ultimately with frustrating forced stealth sections, but it was the strength of the story and the surprising emotional touches with its lead character who has previously been the stereotypical shooter action hero.

With The New Colossus, Blazkowicz is a different person. He doubts himself due to his near death experience, doing all he can to keep his colleagues and family safe from harm even if his body is now failing him. Hearing him internalize his thoughts, and seeing pieces of his childhood helped me really to really care and root for B.J. He became more than a mindless killing machine in a way. 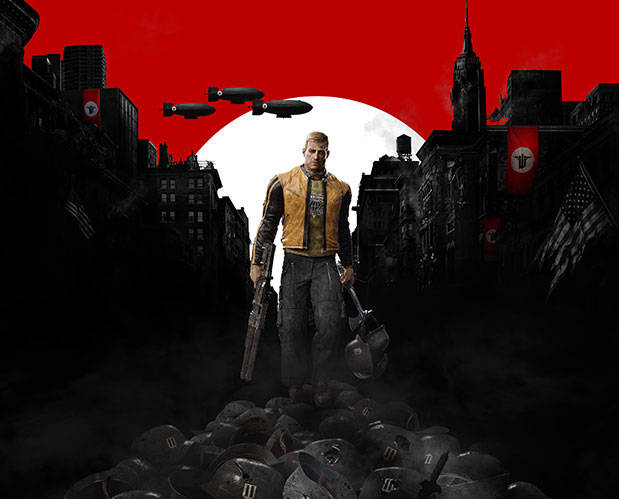 Also, the game has so many surprising twists and turns. Like, some crazy things happen. The antagonist, Frau Engel, is so easy to root against, but man is she voiced extremely well. I can’t imagine how hard it was for Nina Franoszek to voice someone so hate-filled and vicious. She did an amazing job, however.

No surprise here but the soundtrack is utterly fantastic. Oh, and wouldn’t you know, it’s Mick Gordon who also gave us incredible music for Doom and two seasons of Killer Instinct.

Horizon: Zero Dawn – The Frozen Wilds
By now, most of you should know how I feel about Horizon: Zero Dawn. At the time of the awards, I hadn’t put much (if any) time into its first and only expansion called The Frozen Wilds. This shouldn’t be much of a surprise, but it’s a ton of fun and definitely worth your time if you want more Horizon in your life.

Hollow Knight
Well, I completely failed here. I played Hollow Knight earlier this year, but it completely slipped my mind when I was putting the awards together. Hollow Knight absolutely deserves a mention as one of the best downloadable games of 2017. Sporting beautiful hand drawn art with fun Metroidvania style gameplay, Hollow Knight introduces players to Hallownest, a massive interconnected underground cavern, just begging to be explored.

Players will come across areas not accessible until a certain ability or item is found, located lots of hidden gear to find, and even meet some interesting NPCs as well. Combat revolves around melee as well as a magical ability called SOul which can be used to heal or damage enemies. Areas have boss to defeat, which, in a true Metroidvania style game, unlocks new abilities. The difficulty can spike at times, but if you’re in the mood for a gorgeous Metroidvania style game, Hollow Knight cannot be recommended enough.

Agents of Mayhem
I initially passed on this game due to the relative lack of marketing and generally average to poor reviews it got. Coming from Volition, a studio which has produced some fantastic gems like Red Faction: Guerrilla and Saints Row 3 and 4, I was disappointed that Agents of Mayhem didn’t turn out better. It’s definitely not a Saints Row replacement.

Still, I picked up a copy of the “Complete Edition” after seeing it heavily discounted and I have to say, it’s fun. Perhaps having lower expectations helped in this regard because it’s certainly not Saints Row 5 and expecting as much will definitely leave you disappointed. Though the game features heavy influences from that franchise (I mean it has Gat, Oleg, Pierce, and Kinzie to name a few, features the color purple, the Saint’s Fleur-de-lis, and uses names like Morningstar), it feels much more limited in scope and style. This third person, open-world shooter has a large roster of unique characters to play as and features a bit of humor as well. Honestly, if you’re looking for a nice stop gap, or something to pass the time with, Agents of Mayhem isn’t a terrible choice.

Okay, that last line may not be the biggest vote of confidence, but ultimately, I was surprised at how much fun I was having in Agents. Temper your expectations and you just may as well.

What Remains of Edith Finch
Giant Sparrow has a knack for making imaginative games. Take a look at their first release for example. The Unfinished Swan is a creative and imaginative story about a boy dealing with the loss of his mother, who was also an accomplished artist. Each level in the game tapped into this element by introducing The Painted World to the player, which also added a new gameplay concept. The first level, for example, was completely white, and players had to essentially throw black paintballs to see the world and navigate around it.

While Edith Finch takes these creative concepts, the game itself feels more fleshed out. You play 18-year-old Edith Finch, returning to her family home for the first time to learn more about her family, their odd quirks, and why they’re known as America’s most unfortunate family.

Ultimately, this isn’t going to be a game for everyone as it’s not a shooter, isn’t action heavy, and is essentially a story-driven, walking simulator. What it does, it does so well though. I found the story and location super compelling and I generally loved getting to explore the sometimes dark and depressing lives of each of the Finch members. As Edith explores the house you learn more about the family’s tough history as well as experience the final moments of each member of the family. Each segment employs a new visual technique and gameplay experience, making these short segments feel really special. It’s an odd contrast as well because the game is ultimately about death, though each story is presented with such imagination and creativity.

What Remains of Edith Finch is a fairly short game and won’t challenge you, but it’s a game that has an interesting tale to tell, a well-crafted environment to explore, and visually diverse allegories to experience.

Were you able to play any games over the holiday break? Any that surprised or delighted you? Let me know in the comments.

5 Responses to The Best of the Rest: Cool Games I Missed in 2017