Nintendo Labo Introduces a Secret Weapon for the Switch: Cardboard

I’ll be honest here. When I heard Nintendo was announcing a new way to play on Switch, I wasn’t expecting much. They already did a Nintendo Direct last week, so I was pretty sure there wasn’t going to be any revolutionary game announcements.

And then they revealed cardboard props. At first, I couldn’t believe what I was seeing. Cardboard? I laughed it off initially, ultimately confused at what all the fuss was about. Then I read more about it. Then I watched the announcement video.

I think I’m on board with this plan.

Essentially, Nintendo Labo is a game/toy hybrid device. It’s a kit that comes with a game and cardboard cutouts that can be constructed into various objects like a house, 13 key piano, fishing rod, robot suit and more. Using the Switch, you build the object, then you can play with it using the Switch. Here, check this video out for a better look at what’s going on:

Before I delve into my brain a little further, I’ll fully admit that this announcement really isn’t for the prototypical gamer. It’s likely going to have no hold over the hardcore Call of Duty fans, or others who really only care about the big name, AAA scene. And that’s fine. Diversity, variety, and having multiple options to chose from is always a great thing.

As someone who does spend a lot of time playing games then, why does this appeal to me? After I managed to break free from the classic gamer-mindset, I started to realize the genius behind this strategy. The way I see it, Nintendo is fusing the building elements of toys like Legos with video games. It’s kind of like taking those toys to life games and evolving it further. Now, there’s a physicality to the normal actions of playing a game.

As a person with young kids and looking for ways to show them how great video games can be, this is a home run. Not only is it an engaging activity because you first have to build the object, but then you get to use it in fun new ways with the help of the Switch. The other aspect that impressed me is the Discover phase, which explains who the object you made works. Using the Switch, you can see the technology and how it communicates with the console. It’s a small, but really interesting detail. 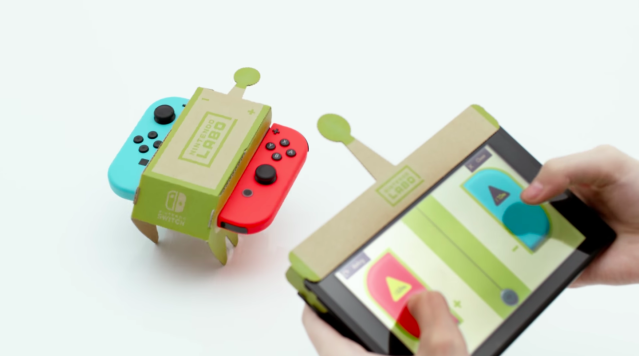 Nintendo Labo launches in April at a price point of 70 and 80 dollars depending on the creation kit you want. I’m guessing the 60 bucks represents the game that’s bundled and then the 10 and 20 bucks on top of that covers the material cost of the cardboard, string, and plastic packaged in. The price point was a little higher than I anticipated and I’m a little worried that this will eventually suffer from the Guitar Hero/Rock Band problem in terms of storing all these devices somewhere in my house.

I’m also somewhat worried about durability because we’re basically talking about a cardboard product designed for kids. By that same token, you’d hope that Nintendo also considered this fact and found a way to perhaps strengthen what is normally a pretty flimsy material.

Ultimately though, I’m intrigued by this. I think a large part of this has to do with my kids, but as a gateway into gaming and another tool which helps inspire creativity, imagination, and fun, I’m very much on board. This is very clearly a Nintendo thing, quirky and unique. Regardless of what you think of Nintendo at this point, I’m glad they’re still around innovating.

4 Responses to Nintendo Labo Introduces a Secret Weapon for the Switch: Cardboard