After a slight delay, Middle-earth: Shadow of War is finally here, continuing the story of Talion and Celebrimbor as they take the fight to Sauron in Mordor.

Shadow of Mordor was one of those games that seemed like it wasn’t going to live up to the hype. On paper, it had a lot of great aspects to it like the Nemesis System, big open world, third-person action, etc, etc. Thankfully, I was wrong and Monolith created something truly unique and fun to play.

With Shadow of War, the studio took those things that worked well, and simply built on top of it. The theme I’ve noticed so far is more, as the world is much larger and more diverse, there are more skills to unlock, orcs to fight, and things to do in the world.

Overall, I’ve found the game to be a really well-made sequel. In my experience so far, all of the worries and fears over the forced microtransaction system are unfounded because it’s really unnecessary. I haven’t felt any desire to spend any sort of currency at all because the game dishes out items and new orcs like candy on Halloween.

Even though I’ve put a lot of time into the game so far, there’s so much I haven’t done yet. So I’ve instead put together four of the biggest changes to the formula I’ve seen so far in Middle-earth: Shadow of War.

Massive Skill Tree
While the first game also had unlockable skills, the one in Shadow of War is downright overwhelming when you first get a look at it in game. Talion now has six different categories from Ranged, Predator, Combat, Mounted, and much more. Each category has six primary skills to unlock as well, with one point opening up the next skill in order. Where it gets way more detailed from there is that each primary skill has two or three modifier skills as well, letting players further customize Talion to their play style.

Again, when you first see it, the tree looks daunting, but as you play, it’s not nearly as crazy as it appears. I personally enjoy the added customization options and being able to put a twist on classic abilities from the first game such as Detonate. Instead of simply making a fire pit explode by shooting an arrow at it, I can instead use it to call forth spiders or Ghuls and really ruin an orc’s day.

Loot System
Also new to the game is a loot system, which lets players find new gear like swords, daggers, bows, cloaks, armor, and more. The gear isn’t just for better stats like increased damage or protection, it also gives Talion a new look and comes with a little piece of lore from Middle-earth as well. Gear also comes with a challenge to complete, letting the player to further upgrade the piece once it is completed.

I’ve found that this new system adds a tactical layer to orc interactions especially since the only way to earn new gear is to kill captains and warchiefs. You have to decide: Is it better to dominate orcs and add them to your army, or do I choose to kill it and get some better loot? Keep in mind that you can’t do both. Decisions, Decisions.

Diverse Locations
While the world was fairly large in Shadow of Mordor, it was essentially split into two and featured a lot of muddy brown colors. Shadow of War fixes a lot of that by adding five distinct zones for each player to run around in this time. Minas Ithil is an urban zone, taking place in the large city, Nurnen returns and features more ruins and forested areas, Cirith Ungol primarily takes place in an underground cavern, Golgoroth has plenty of volcanic plains and lava to navigate, and the mountainous Seregost has plenty of vertical areas complete with snow and ice. I’ve found that these zones really help to break up the look and feel of the game,

The map also does a great job showing off all these zones and people who enjoy learning more about the world can find icons which explain major points of interest. Lore can be read for places like the Black Gate, Minas Tirith, and much more. 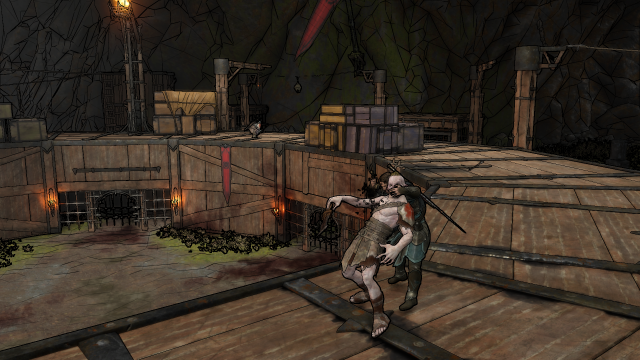 I call this one: Middle-earth Shadow of Borderlands

Nemesis System
Okay, this one isn’t really a big change form the first game, but the really surprising element with it is how much more detailed and expansive the Nemesis System has become.

Not only has Monolith increased the number of unique elements from Orcs including traits, names, and appearances, but the entire system has evolved. Orcs are now capable of a lot more, seemingly remembering the smallest of details even as some may cheat death time and time again. This one time I assigned one of my captains as my bodyguard who I could call on when I needed help. Well, I apparently didn’t call on him enough, because he tracked me down during a random fight I was in and announced that he assumed the bodyguard role would have more for him to do and decided to betray me. What’s worse is that he had learned the Iron Will trait, preventing me from dominating his mind again.

Speaking of learning, orcs can also evolve and learn through combat. I’ve found that by performing the same move over and over, the orc will learn to counter it mid-combat, earning a trait that helps them better defend. So continually jumping over them may result in the orc learning the vault breaker trait, preventing players from using that move.

The number of diverse orcs I’ve seen is off the charts impressive and even then, I’m still seeing new combinations. My favorite may be a bard looking orc who sings threats at me. Also, I’ve seen plenty of unique combinations like an orc who only barks due to some sort of home lobotomy or something. A number of unique orcs you’ll come across is staggering and part of the fun.

Bonus: Photo Mode
While Shadow of Mordor wasn’t the first game to include a dedicated photo mode, it was one that really embraced it and gave fans plenty of tools to work with. Shadow of War continues this legacy and like the Nemesis System, it presents a retooled mode for fans to play around with. Yes, all the familiar and expected tools are here, but new options are also included as well. ONe such option is the photo style, letting you completely change the look and feel of the image to things like Parchment, Metal, Stylized, Cartoon, and so many more oddball things. It’s a ton of fun to play around with these options and really see what you can create.

While I’m tempted to keep writing about this and show you all the fun things you can do with this enhanced mode, I’m going to hold off. Who knows, perhaps you’ll see something about this soon. Hint, Hint.

This entry was posted in Opinion and tagged Feature, games, Opinion, PC, PS4, Xbox One. Bookmark the permalink.

1 Response to 4 Surprising Changes In Middle-earth: Shadow of War