Battle Chasers: Nightwar Impressions – What Once Was Old, Is New Again

This one has been a long time coming.

Ever since I first heard about Battle Chasers: Nightwar through its Kickstarter campaign, I’ve been a fan. What initially drew me in what its interesting visual style and unique soundtrack, but things went a whole lot deeper when I found out that it’s a game being developed by Joe Madureira and many former Vigil Games employees at the new development studio, Airship Syndicate.

So for those who don’t know, Battle Chasers isn’t a new concept or IP. It’s actually a popular comic book series developed by Joe Mad back in the late 90s. For whatever reason, the series came to an abrupt end after only 9 issues in 2001, leaving fans wanting more after a big cliffhanger. It’s been a long wait, but the series is finally making a comeback and the first wave of reintroducing the gang is through this game.

Now, I’m sure hearing Joe Mad and Vigil in the same sentence automatically makes you think of Darksiders, and I can’t blame you. However, check those ideas at the door because Battle Chasers is a pure RPG experience, evoking many elements from old-school turn-based RPGs like Final Fantasy. Gunfire Games, the other half of the former Vigil Games, has you covered with Darksiders 3 in 2018.

After almost 10 hours in the game, is it everything I was hoping for?

The story takes place in this steam/arcane punk style world, centered around a group of adventurers/mercenaries who are shot down by bandits. The group consists of the war golem Calibretto, the legendary swordsman Garrison, a sarcastic arcane wizard called Gnolan, the bounty hunter known as Red Monika, and Gully, a 9 year old girl whose father mysteriously vanished leaving behind powerful magic gloves. After the crash, your group is scattered, so one of the core aspects is locating each member while trying to figure out why all of this is actually happening.

The overworld map has your trio of characters running down various paths moving from objective to objective. It’s not as linear as it sounds however as there are different paths to explore and each may hold things to find like loot, treasure, or other opportunities. Battles are thankfully not random like other old-school RPGs, as an image of the enemy is seen along various points on the road and simply standing on the same spot initiates combat. What’s nice about this system is that it allows me to plan ahead and prepare for the battle and doesn’t kill the flow due to surprise attacks. 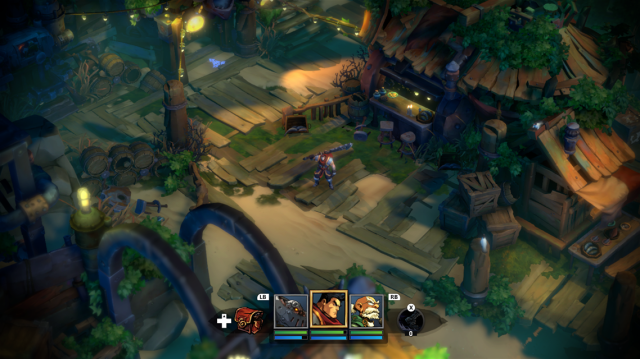 The game also features explorable areas and dungeons, where players take control of a character and actually explore an open space. It’s not quite like Diablo however as characters are limited to a couple of special moves they can use while wandering the zone. Enemy characters can be seen walking around here as well, letting players confront or avoid if needed. What’s better is these dungeons have plenty of loot, lore, and items to find. In some situations, unique items can be found or decisions can be made such as whether or not to take a weird looking vial or inserting a special weapon into an odd looking alter. Many times, these decisions have interesting outcomes.

Enemies won’t respawn when you leave a room either, so solving a puzzle isn’t super tedious or difficult from being interrupted over and over. With that said, you can reset the dungeon or increase its difficulty letting you harvest more treasure and exp if you want. Same goes for the overworld map, which can be reset by resting your group at an inn.

Combat is really the star of the show here and as I mentioned above, it reimagines that classic turn-based style from RPGs of the past. Characters take turns dependant on the Haste statistic and players can see which character goes next thanks to a meter on the right side of the screen. This allows players to plan ahead as some attacks may take a few turns to charge up and unleash. 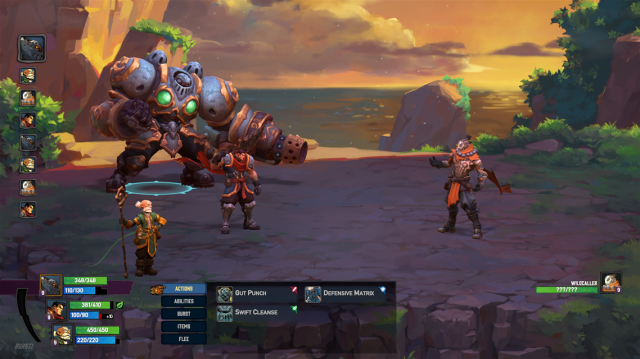 Overcharge is one of those new additions to combat, essentially letting players build this resource by using simpler/instant attacks. Overcharge is then placed on top of the mana bar, letting players use it for bigger and more powerful moves before eating into the mana bar. This basically adds an interesting tactical layer to combat, giving players options about whether to build overcharge first or start spending mana to get those big attacks and abilities out first.

Visually, the game looks like a living comic book, which based on the franchise’s history shouldn’t surprise anyone. It’s colorful, and has a style that actually looks like someone hand drew much of the art. There’s plenty of interesting characters players will interact with and I personally love all of the little details such as the rotating swirls that represent clouds and water on the overworld map.

The soundtrack is also a standout and really reminds me of something Supergiant Games might put out for their titles like Bastion or Pyre. Once I found out that Jesper Kyd was involved, the puzzle pieces started to fit together. I should also give a shout out to Clark Powell, the other composer on the project because they both really brought it on this one. Check out Sunrise and Mud & Lead, Blood Red for a taste of what this game brings to the table…and your ears.

Almost 10 hours in and the experience has been pretty smooth with only a few, tiny nagging issues to report. I’m currently playing on the Xbox One version and weirdly enough, the first couple of battles usually feature a loading screen when combat is initiated. The longer I play, the less loading time is needed. In addition, there have been a few framerate drops in seemingly random areas of the game, nothing major, but noticeable. Lastly, I’ve heard a weird audio glitch where after fishing, the sounds of waves lightly splashing against the shore remained audible even though my character had left that area. The only way to fix it was to save & quit, and load back in.

Again, these are all fairly minor issues in the grand scheme of things, but certainly worth reporting.

As someone with no prior knowledge of the Battle Chasers franchise, I find myself really drawn in and invested in this world Airship Syndicate has created. I mean, what they’ve managed to pull off here is pretty impressive. Not only have they taken and elevated a gameplay system which many view as outdated, but they paired it with a franchise that hasn’t been seen in 16 years.

With all of the shooters and open-world games on the market these days, Battle Chasers: Nightwar feels like a breath of fresh air. If you’re looking for something a little different or are a fan of RPGs, this game should definitely be on your radar.