The Magic of Pyre and the Supergiant Games Formula

After their last game release, Supergiant Games basically entered my trust list. That is, a fictional document in my head that’s basically a list of developers whom I’d pretty much buy from on day one, sight unseen. For me, these guys came out of nowhere to deliver memorable experiences like Bastion and Transistor.

What I find so compelling about the studio is their ability to tap into new ideas for each game. For example, Bastion is an isometric action-RPG set in an interesting hand-painted world. Transistor, on the other hand, takes place in a more sci-fi style world and uses a special pause and plan style of combat known as Turn(). Needless to say, each game plays quite differently from one another and that’s really what I admire and respect about their formula. They don’t tend to rehash ideas, even if they prove to be successful.

When Pyre was first announced, I was excited to see a new Supergiant game, but for some reason, it didn’t resonate with me like the other games had. Perhaps it was because I didn’t quite understand what it was. Unlike the previous games, first details showed an almost 3 on 3 style sports game. I didn’t totally understand it and unfortunately, it slid off my radar.

Perhaps it was positive word of mouth or some new gameplay which attracted me back to the game. I decided to jump in and found a brand new experience once again. As I should have guessed from the start, Supergiant has another winner on their hands.

Pyre takes place in a high fantasy style setting where individuals branded as criminals for various just/unjust crimes are exiled to a place called the Downside. It’s here that various factions travel this purgatory like place in an effort to cleanse their souls and return to society by participating in events called Rites.

The Rites are where the bulk of the gameplay happens and it’s basically like the Rift mode from Destiny mashed up with something like Rocket League. Two teams of three fight over a ball, where the goal is to throw or run it into the opposing team’s pyre. Only one player can move at a time, so players will need to switch manually or when they want to pass the ball to someone else. The defending team can try to steal the ball or “banish” a player. 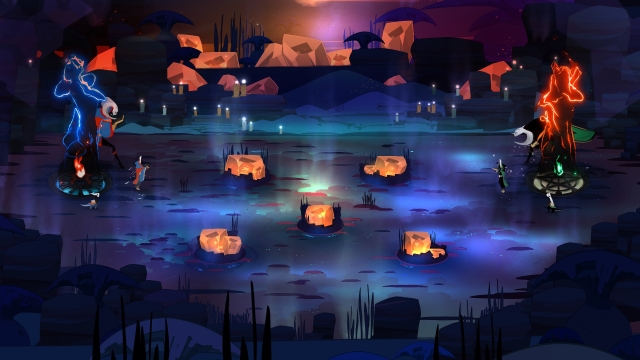 Banishment is done by either touching an opponent’s aura or getting hit by an aura blast and takes that affected player off the field for a few seconds. Scoring the ball reduces a Pyre’s health total and once it reaches zero, the match is over. Adding a layer of strategy to these games is the fact that players have access to a variety of characters to pick from, each with their own strengths and weaknesses.

For example, the large demon Jodariel may be quite slow, but she has the largest aura of any character type and hits the pyre for a lot of damage. Sir Gilman, on the other hand, is quite small, which gives him really high mobility but his damage output isn’t nearly as good as Jodariel.

So yes, the bulk of the gameplay revolves around these sports combat missions, but what really surprised me was the story moments that held these segments together. The characters are not simple stand-ins, only serving as a character type for each of the events. New companions join the team over time and you actually get to know them on a personal level as the game progresses. You learn about the life they used to lead, what got them sent down in exile, and their beliefs as well. The game slowly reveals a major plot as time goes by, pulling you even further into the narrative and dedicating you to making sure your exiles are the ones to succeed.

The more I learned about these individuals and what makes them unique, the more I found myself caring about what happens to them. The writing is top notch and there’s a TON of dialogue which provides plenty of exposition. It went a long way to helping make me feel like I was actually a part of this world and trying to help these people get back to their life on the other side.

The music is also phenomenal, though, for those of you that have previously played a Supergiant game in the past, this won’t be major news. Darren Korb once again smashes it out of the park as his songs work wonders to enhance the game further. 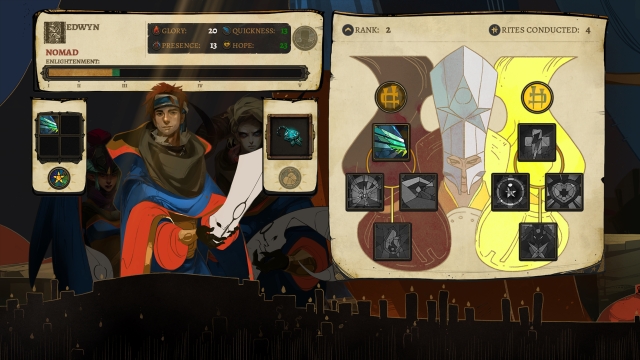 If you couldn’t already tell from the heaps of praise I’ve already uttered in this write-up, Pyre is simply magical. It’s a game that’s difficult to describe let alone compare it to anything else, and yet, each of its parts works in harmony with one another to craft an unforgettable experience. From the music, the gorgeous and vibrant colors of this storybook style world, to the NPCs who you generally feel emotion for, Pyre is a game that managed to not only pull me in right from the start, but it had me thinking about it even when I wasn’t playing.

Not only is Pyre a game that’s absolutely worth checking out, perhaps you should start putting Supergiant on your trust list going forward as well.

This entry was posted in Opinion and tagged games, Opinion, PC, PlayStation 4, PS4. Bookmark the permalink.