Clone style characters are nothing new to fighting games. Simply put, they’re different looking characters that basically take the move set from an existing character and add in a few different effects or colors. Ultimately though, they’re pretty much a direct copy. Recently, Killer Instinct added Kil-Gore, a variation on their killer robot Fulgore, just with a few tweaks here and there.

The popular Smash Bros series is probably the best example however as its roster typically features a handful of clones from Falco (Star Fox), to Ganondorf (Captain Falcon), and even Dr. Mario (Mario). While most fighting game fans wouldn’t argue against having more characters on a fighting roster, these clones traditionally take up a roster spot and require added development time, which in turn prevents other, potentially more unique characters, from being added.

It’s that specific reason why the premier skins coming to Injustice 2 have me really intrigued. 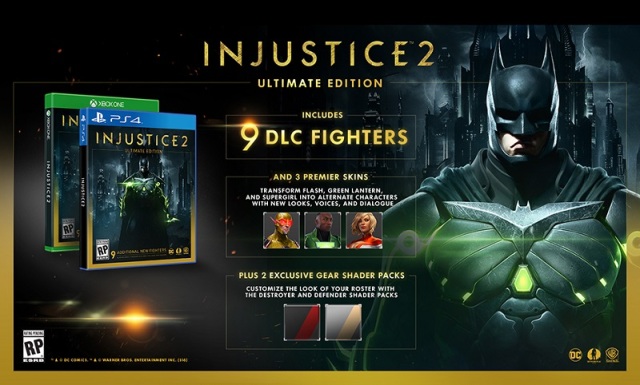 For those who don’t know, the snazzy CG story trailer that released earlier this week revealed fancy premium versions of the game, including everything that’s included within it. Both the ultimate and Digital Deluxe versions mentioned the inclusion of premium skins for Green Lantern, Supergirl, and Flash. What makes these skins unique is that not only do they change the voice and dialogue of those three characters, but they completely change their appearance as well. The Flash becomes his arch-nemesis Reverse-Flash, Supergirl becomes Powergirl, and Hal Jordan Green Lantern becomes John Stewart Green Lantern.

Keep in mind that the moves don’t change, even though you may be using Reverse FLash, the move sets will mirror that of Flash, perhaps with different effects and textures to show a little difference. While NetherRealm has not confirmed anything further regarding future content, I’d be surprised if they stopped there with just those three.

Instead of adding Reverse-Flash, Powergirl, and Green Lantern (Stewart version) and having them take up 3 of the (rumored 30) roster spots, they’re simply alternate skins. That way, the game can add three different and potentially unique characters instead and keep fans happy who may have wanted to actually see Powergirl added as a character.

Frankly, I love this idea and I hope NetherRealm continues this trend.