I think we can all agree that October has been a whirlwind month for games. Even with the likes of Battlefield 1, Titanfall 2, and carry over games from September like Forza Horizon 3, I’ve been pretty caught up in Gears of War 4.

I’ve always been a fan of the franchise and even though I felt Judgment didn’t carry the same weight as the previous numbered games, this new entry hits all the right notes. It’s a return to form in my opinion with some stellar high action thrills, interesting story bits, and satisfying combat.

On the story side of things, I recently wrapped up the campaign which featured a surprising reveal/twist at the end and frankly, I need to talk about it. It’s something that I didn’t see coming, but one that brings a lot of clarity to some of the things that occurred during the campaign.

If you’re looking for more impressions on Gears 4 as a whole, I’m afraid you won’t find that here. I’m about to dive into some major plot points for Gears of War 4 so if you want to avoid spoilers, I would advise against clicking below the jump until you’ve finished.

Seriously, major spoilers for the campaign are ahead. Click at your own risk.

For the rest of you, let’s go!

So a good portion of the campaign involves going on a man hunt for Reyna Diaz, Kait’s mother, who was captured by the new enemy group called The Swarm. Before we go any further, lets get some more background on The Swarm.

Gears 4 picks up 25 years after the third game which put an end to the Locust and Lambent threat. Unfortunately, the COG eventually found out that Locust corpses don’t decay in a helpful way, instead becoming almost entombed inside of a yellow crystalline husk making disposing of the bodies an incredibly difficult process. As an alternative, the COG decided to bury these crystalline bodies in mass graves at designated sites.

As it’s later revealed, the Swarm are essentially an evolved version of the Locust, who apparently went under some sort of metamorphosis of sorts in those husks. What’s even more twisted is that they’ve been raiding human villages, stealing the population, and turning them into  new enemy types like juvies and drones. In addition, The Swarm is connected together through a mass hive mind, making them quite dangerous.

Jumping forward in the story, Marcus Fenix, who was also captured at one point, was able to connect to the hive mind while inside of an appropriately named enemy type, The Snatcher. This intel give JD and his crew insight into where Reyna was being held. The first clue that something is off is the fact that Reyna wasn’t put in a pod like most people.

Jumping forward to the end, players find Reyna, still alive, but slowly being mutated by The Swarm. Still fully aware, she asks Kait to end her suffering, which she reluctantly does. As Kait emerges from the nest, she’s holding one last relic from her mother, a necklace with an intricate design. As the camera pans around however, players see a familiar symbol on the back of the necklace: the old Locust Horde icon.

So what does this mean? Reyna admitted that the necklace was a family heirloom that was passed down to her from her mother. Even though Kait had never met her grandmother, why would a person, who should be opposed to the Locust considering all of the bloodshed in the past games, even have a necklace with their symbol on it? 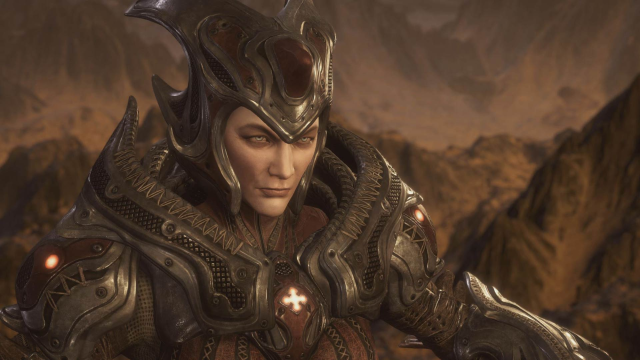 Consider this: Reyna’s mother is none other than Myrrah, self appointed queen of the Locust and constant thorn in the player’s side from Gears 2 and 3. Unlike the reptilian Locust, Myrrah was actually human and part of the original project that ultimately (accidentally) created them. From a continuity standpoint, it makes sense and could also be a big reason why The Swarm were so interested in capturing her and not podding her like everyone else. Perhaps they were interested in making Reyna their new queen?

This theory does leave a few questions however, including the fact that Myrrah died at the hands of Marcus at the end of Gears of War 3. So how was it she was able to have a child, especially a normal looking human kid at that? She was a scientist previously, so there’s a number of ways The Coalition could explain it I suppose, but I’ll leave that for another time.

Gears of War 4 ends on a sort of cliffhanger, with Marcus clearly stating that this isn’t over. Could that mean The Swarm will now move their attention to Kait, considering she’s the last surviving member of that bloodline? What will Marcus and the former Delta Squad think when they see the symbol on that necklace?

So many juicy questions left to answer. For those that have experienced that scene, what was your reaction?

This entry was posted in Opinion and tagged games, Opinion, PC, Xbox One. Bookmark the permalink.