I don’t know about you, but single player campaigns in military shooters are largely forgettable. For many, multiplayer is where the meat of the experience is and a campaign is there to satisfy a small portion. Outside of a handful of titles like the Bad Company games and some earlier Infinity Ward Call of Duty games (I’m looking at you Captain Price), these campaigns largely exist just to exist.

Typically, they break down in the same way, where a generic soldier type either faces some adversity, gets promoted under dire circumstances, or fights back against the odds. Generally speaking, this protagonist acts like a first person shell so the player can add in their own personality to the experience. Ultimately for me, these experiences end up being hollow and forgettable. 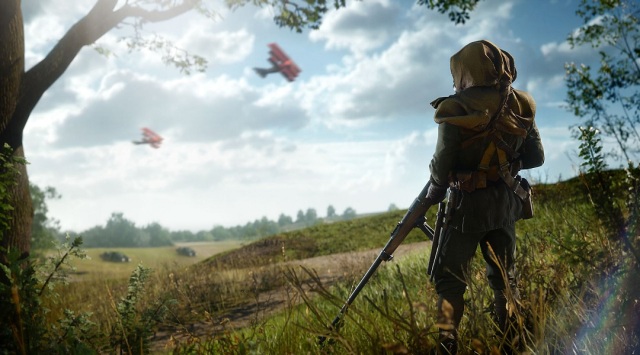 I mean, can you even remember the name of a character or the protagonist from Battlefield 3 and 4? I’ll wait…

Hey, no cheating! Close that Wikipedia page, and no Googling it!

While the gameplay is fun, the story just isn’t memorable as many players simply ignore the campaign in order to dive into the multiplayer portion. I know a good many people who took this route with Call of Duty: Black Ops 3.

While I applaud DICE for moving the timeline out of the near-future era that studios seem to be in love with these days, my feelings over the campaign for Battlefield 1 didn’t change. I’m glad it’s there, but multiplayer is the focus. That feeling pretty much evaporated however once they revealed what they were attempting to do with the single player experience this time around.

DICE, you have my attention.

Frankly, I’m a big fan of what DICE is attempting to do with this single player campaign. Instead of putting players in the shoes of a human shell named Gruff McShooter who’s taking part in a single large scale conflict, they’ve decided to take a different approach entirely. In an effort to respectfully depict The Great War, players will be stepping into the shoes of multiple characters during the war.

This is intentional, placing more of a focus on the perspectives of individual people, hopefully letting the player better connect with each character and telling a more personal story as well. From a gameplay perspective, it also gives DICE more opportunity to inject some more variety into the experience as players will be hoping to different locations during the campaign.

The trailer gives a great sneak peak at some of the characters you’ll be seeing and what they’re up against. Lawrence of Arabia looks to have an integral role as his Arab rebels face off against the overwhelming forces of the Ottoman Empire. Other stories involve a dysfunctional British Mark V tank squadron, an ace pilot and his photographer over the Western front, an Italian Arditi squad battling on the Alps, and a group of ANZAC soldiers taking part in the Gallipoli landings.

What I really like about the trailer though is how it puts a greater focus on humanity during this conflict. The last shot where an Allied and Central soldier aim their guns at each other, manages to say a ton even without any words being spoken. While these two are enemies, you can see that both are clearly looking for a reason to not fire their weapon even as they’re surrounded by bodies and a torn up landscape.

I got a strong Band of Brothers vibe from the trailer, as the campaign looks to tap into more personal and emotional stories. Seeing the mindset and how the war affects these characters will hopefully provide a more memorable and engaging experience than a typical militaristic FPS games have in the past.

Personally, I’m excited to dive in to this in a couple of weeks. I’m glad DICE is trying something different here, and I really hope this pays off. Thankfully there isn’t too much more time until we finally find out if this change in design worked.