Well gang, the summer lull is officially over and we’re quickly speeding into the holiday release rush period. One of my most anticipated titles of 2016, ReCore, finally hits store shelves next week and I couldn’t be more excited.

For those who are scratching their heads at the moment, let me give you a quick breakdown on the game. ReCore is a third person action-adventure game that takes place on a distant planet known as Far Eden. After waking from a 100 year cryo-sleep, Joule Adams discovers that the planet has not been terraformed as originally planned. Worse yet, the once friendly robots who had been tasked with working on the colony world have taken over and become hostile. It’s up to Joule and her corebot companions to figure out what’s going on and how things went terribly wrong.

As I mentioned, ReCore is a third person action-adventure game containing RPG elements such as a leveling system, customization, loot, and some good old fashioned platforming. The game is created by Armature Studios, former developers who worked on the excellent Metroid Prime series, with help from Microsoft and Keiji Inafune’s team at Comcept.

Inafune helping on a game that features robots that have gone berserk? Yup, it is starting to all make sense now, isn’t it.

One thing I didn’t realize however is that the game isn’t linear. Sure, there’s a main story to follow but the game is semi-open, allowing you to travel where you want, even though you may not be able to do everything right away. Yes, that’s right, ReCore does feature classic Metroidvania gameplay, where Joule will learn new abilities as the game progresses and giving her access to new areas.

These new abilities will certainly help in the optional dungeons littered around the world, promising more loot and items to help craft things such as new Corebot frames. Not only that, your corebot pets level up on their own as well, learning new abilities as well as increasing their stats.

In fact, if you want to see this game in action, have a look at a recent gameplay livestream with Major Nelson and Joe Staten. Not only does it show off the game, you’ll get some great insight into the design process and some other nuggets of information. It’s definitely worth your time, especially if you’re on the fence or even a bit curious.

Even as excited as I am for the game, I can’t help but feel that there are some things that are working against this new IP.

Positioned as one of Microsoft’s major releases this year, ReCore has at times felt like an after thought of sorts. Sure, we all know Gears of War 4 is Microsoft’s big flagship title for 2016, that much is obvious. While ReCore has been featured at recent tradeshows and has gotten all sorts of positive feedback and impressions from those who have played it, there doesn’t seem to be much marketing for the game at all. Trailers are scarce, posts on various major gaming websites are minimal at best, and there just seems to be a lack of attention directed at the title. 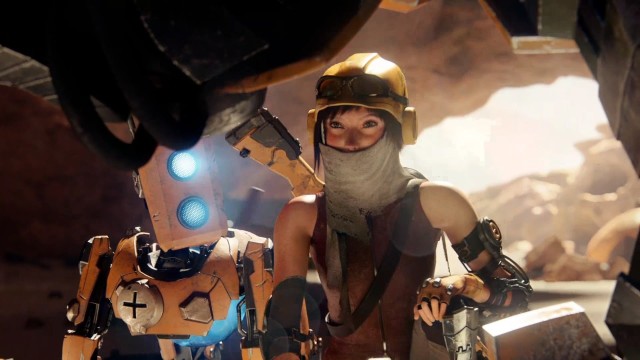 Even at E3 a couple months ago, ReCore’s time on the Microsoft stage was minimal as only a short but stylish 2 minute trailer was its only representation. Considering the title was due out only a couple months after, you’d think it would have been given some demo time.

Not only that, ReCore sports a budget price of $40 and while I’m all for a discount, that lower price point is probably not doing the game any favors. Traditionally, releasing a game at a lower price can tend to add the stigma of either a perceived lack of confidence in the title or one of a company is maybe knowingly admitting that the game may not be up to the standards of a full priced game.

I’m not saying that’s the case at all for ReCore. In fact, I personally don’t feel like this is true at all for ReCore based on everything I’ve seen and read. ReCore strikes me as a passion project, one that has seen a lot of care, time, and effort poured into it. I hope that stigma of a budget friendly game doesn’t affect how people view this title.

Honestly, ReCore looks like a fascinating game. Combining platforming, third person shooting, and platforming all sounds like a recipe for a good time, if you ask me. Couple all that with the fact that it’s written by Joe Staten (of Halo fame), made by Keiji Inafune (of Mega Man fame, forget Mighty No. 9, will you?), and the folks at Armature (of Metroid Prime fame) and you have my attention.

I do wish the game got a marketing boost, but maybe it just wasn’t in the budget, I don’t know for sure. Either way, I’m pumped for ReCore and can’t wait to get my hands on it next week. I’ll let you know if it holds up under my expectations.

Have you been following ReCore or did I just introduce you to something new?

7 Responses to I’m Rooting for ReCore