The first technical test of Titanfall 2 has quickly come and gone and I think the team at Respawn has learned a lot from it. The early build of the game allowed players to get a very small taste at what the final version of the game will offer with three multiplayer modes, and a training mission which gives some insight into the world of Titanfall and where things are after the events of the first game.

Before I get into my impressions, I want to take a minute to stress that this was a pre-alpha build of Titanfall 2, a very early version of what will eventually be the final product. So while I thought the game was visually impressive, especially when compared to the first game, I’m not going to spend too much time talking about things like that because it was an early build and it will likely change. What matters most in this case is the actual gameplay since those core mechanics are set in stone.

With that said, here’s what I thought of the early experience…

Just real quick, I was impressed with the connection speed and server stability during the event. I know this was a technical test and that many expected to see some trouble, but everything was as smooth as butter for me.

Like the previous game, players are put into the shoes of a pilot, an elite soldier gifted with the ability to pull off fancy and stylish moves such as boost jumping, boost sliding, and wall running. It’s these high mobility moves which help the game stand out from other multiplayer shooters, and to me, it felt like Respawn amped this aspect up. Sliding now gets an added boost, letting players essentially dash longer distances while making things feel even faster than they did previously. All in all, the game moves as a much higher pace and for the most part, I think it works.

New gear is also in place for players to take advantage of, such as the grappling hook, which took me by surprise a bit. Coming off games like the Batman Arkham series or even Just Cause 3, it’s easy to assume how it’ll work. Unlike those games however, using the hook doesn’t reel you in nearly as fast. Instead, it’s more like a swing, enhancing momentum while helping players to get to higher ledges if they want. It takes a bit to get used to but I found myself really liking it after a few tries with it. The grapple hook can set up some really cool moments as well, and letting players chain moves together like boost jumping, or sling shotting over long distances.

While the first Titanfall was like a warm embrace for both casual shooter fans and the hardcore, Titanfall 2 appears to be taking a much different approach. Gone are the safety nets for less skilled players as two of the three modes in this test phase placed the focus squarely on player conflict, removing AI targets completely. Amped Hardpoint puts a spin on the capture the point mode from the first game, as players can capture the point a second time to double the points gained from it. Pilot vs pilot is just that, players only, no titans or AI allowed.

The third mode available in the technical test, and my personal favorite, is Bounty Hunt, where both teams gain money by defeating AI units that spawn in randomized zones on the map. Kills earn players money and after each wave is done, two banks open up where players can rush and deposit their earnings from the previous round. The catch here is if a player is killed by someone on the other team, that player steals their cash. It makes the deposit rounds extra tense over the prospect of losing all that hard earned cash. There’s nothing quite as deflating as getting killed and losing your money while only a short distance away from the bank.

While I know many will be happy with the removal of AI fodder to shoot at, it does seem to have a negative impact on the ecosystem. Without the ability to gain points off of grunt kills, calling in titans is a much slower process as players need to take out other players or find ways to score points to fill a meter in order to call down your titan. In addition, the titan spawn timer, a staple element in the first’s multiplayer, is gone as well, requiring that players gain score only in order to call down their titan. In effect, it makes the titan almost like a score streak reward, and while your progress doesn’t reset on death, the end result of these changes is that titans have somewhat become locked behind a skill wall. 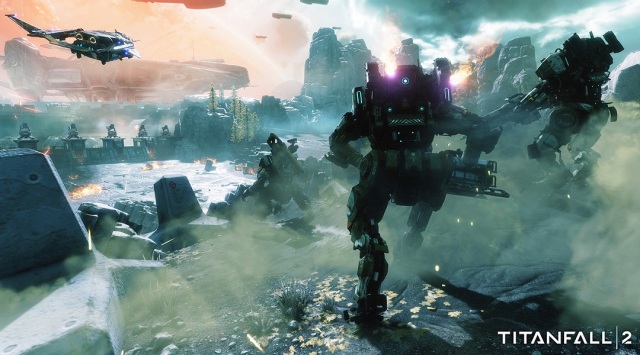 Speaking of titans, the technical test featured only 2 of the 6 with Scorch and Ion. For those who don’t know, Titanfall 2 features a lot more titans to pick from, each with their own style of abilities. Scorch deals in fire while Ion is more in tune with lasers. From what I played, both felt extremely unique, which was a great thing. Customization was limited to a few different unlocks, but the abilities were fun to use and I enjoyed both variations. Either way, these two are vastly more fun to use than the more standard versions found in the first game.

One thing that I noticed is that the titans felt a little more squishy this time around. At first, I thought Respawn removed the shields from them but at closer glance, it was still there above the life bar. I don’t know what it was, but man, taking damage really wiped out your health bar and there were times where I’d call in my titan and 30 seconds later have to eject. I eventually found that shields no longer regenerate, which further exacerbates the issue. Instead, pilots steal titan batteries while performing a rodeo and can hook them in by jumping onto a friendly titan which will then restore shields. When I was playing, not many were doing this, either because they didn’t know about it, or it’s just not something people actively want to do.

I hope these issues are tweaked a bit to make titans last just a bit longer as it was rare to have more than 3 titan teammates active on the field at once. At some points in the first game, everyone in the match could have a titan out at the same time, so to see a core mechanic take a hit like that is a bit disappointing. In a weird way, it almost feels like Titanfall 2 veers closer towards Call of Duty than it ever has, though considering the core staff at Respawn are former senior level developers at Infinity Ward then it starts to make sense. Still, I do hope that a few design changes are made which steer the game back towards the core of the first game, specifically the titan timer.

I think these changes really took my by surprise, as going in, I was pretty confident as to what I’d be seeing. I assumed they’d take the first game and build on it, but it’s clear that Respawn took a number of things back to the drawing board. Titanfall 2 feels similar on the surface, but the game has a ton of brand new mechanics going on under the surface. Thankfully, there’s another technical test coming real soon so players who want to spend more time with the game will be able to. The experience was fun for sure, but it took some getting used to as it felt a bit different. I’m eager to see what sort of changes and updates Respawn will make to the game with all of this data they’ve collected over the weekend.

Did you try the technical test? What did you think of the multiplayer? Did Respawn fix what didn’t need to be fixed?