The Many Ups and Downs of Battleborn

While I’m a big fan of the Borderlands games that Gearbox created, Battleborn never really struck a chord with me once it was announced. For the majority of it’s development lifecycle it had gone largely ignored. I really can’t say why, but there was just something that didn’t quite appeal to me about it. All that changed however as a few months before its planned release date I began to pay more attention, finding some interesting things going on with the game. Ultimately, attending the Gearbox panel at PAX East 2016 and participating in the beta period pretty much sealed the deal for me.

At it’s core, Battleborn is a hero shooter wrapped inside of a MOBA. Gearbox mentioned that they enjoyed designing heroes for Borderlands, and wanted to really continue that for Battleborn, which is clearly seen in the currently 26 character roster. Not only is each character unique looking, they all play very differently from one another, allowing teams to mix and match for best results. There’s really something for everyone on this roster. Of course, each character has a distinct personality and most of them would feel at home in the Borderlands franchise using similar humor and behavior to characters from that world.

The game features three different progressions systems, one for the player, one for characters (with a max rank of 15), and then in-game experience bar for your character through a Helix System, which lets players customize their characters abilities during a match. While it sounds confusing on paper, it’s a pretty neat system, and the Helix tree ensures that each match plays differently since it resets after each match. Character ranks unlock new taunts and color variations, while player rank unlocks new titles, logos, characters, and loot. 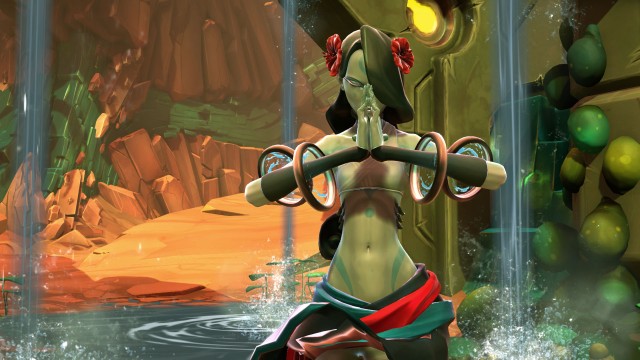 Battleborn is an online experience, requiring an internet connection even for its campaign, which can be played solo. While the experience is bolstered when playing with others (especially friends), the campaign is arguably the weakest aspect. Players looking for a grand story ripped from the pages of Borderlands will want to look elsewhere, as the missions themselves feel pretty much standalone, only held together slightly by the premise that a bad dude is trying to destroy the last star in the galaxy and characters across a number of different factions have united to stop him.

While the combat feels good, the missions themselves are largely a hit or miss. For some reason, Gearbox decided to really hone in on the worst types of gaming missions and develop an entire campaign structure around them. I’m talking about escort missions, where players need to carefully guard a giant mech through enemy infested locations, defense missions where players hold out and try to defend a position against waves of enemies, and timed missions where players need to clear objectives and beat a boss within a set amount of time. The worst part here is that if you and/or your team fails, it’s game over. There are no checkpoints or additional attempts, you need to jump back in the matchmaking queue and try again. Or at least hope that mission is an available choice and that your teammates pick that option again.

I found this aspect to be fairly frustrating, especially at higher difficulties and especially on the last mission which felt like I wasn’t given enough time to do everything the game wanted me to do. When you’re with a well oiled team, it’s generally not bad, but screw up in one spot and it’s usually game over. While many characters are unlocked by beating certain missions, players can thankfully also unlock them by leveling up their player rank, so at least campaign missions can be skipped and nothing will be missed out.

Multiplayer is where this game shines however, and eschews the traditional team deathmatch to offer something a little different by placing the focus more on objective style gameplay. As of now, there are three game modes: Capture, which sees two teams fighting over three objective points, Meltdown, which tasks both teams to help their minions reach an enemy incinerator to score points, and Incursion, where teams try to destroy mechs at their opponents base with the help of AI units.

Perhaps not have a deathmatch style mode is part of the problem. With games like Overwatch, Call of Duty, and other online shooters dominating the market, players seem to be more focused on simply killing other players rather than playing the objective. When played the way that the game wants you to, it’s a unique and fun experience. When matches devolve into players focusing more on killing each other, that’s when things fall apart. Unfortunately, it seems players are more interested in battling each other these days, as the multiplayer scene (at least on console) isn’t what it quite was when the game first launched. Don’t get me wrong, it still has its moments, but it is at a point where it’s not something I found myself wanting to play on a nightly basis.

Battleborn has a lot of potential, but odd design decisions look like it’ll ultimately derail the experience. Not only that, the game had the ultimate misfortune in releasing in close proximity to Overwatch, that it has almost become completely overshadowed. The good news is that future characters and multiplayer content are completely free, but this may be a case of too little, too late.

Hey, at least Gearbox is starting work on Borderlands 3, right?

3 Responses to The Many Ups and Downs of Battleborn