4 Things That Surprised Me About The Division

If you’ve been following me for any length of time, you should be well aware that I’ve been amped for The Division since it was announced all the way back in 2013. After a number of delays and false starts, the game finally released last month and I’ve pretty much been playing it since.

Maybe it was the concept that you were a sleeper agent activated to take back New York after a biological attack took place on Black Friday that hooked me. I don’t know, but I’m really enjoying the fact that it’s a third person shooter mixed with RPG elements.

While this isn’t an official review, I have some general thoughts and feelings about the game that I’d like to share with you now. There’s also a number of things that really surprised me about the title, so here are some of the more interesting (good and bad) aspects that caught my attention.

Matchmaking
One of my biggest complaints with Destiny (along with a good majority of players) is that being pair up with other random players through matchmaking is extremely limited, basically only to strike missions and the PvP side known as the Crucible. Things like the weekly Nightfall, patrols, and for all story missions, you either need to go it alone solo or find some friends to help you.

The Division is the exact opposite, placing a greater focus on matching random players together to play any part of the game. Whether you want to team up to completely story missions, take over the Dark Zone, or just have fun, the game is more than happy to pair you up with other people.

I personally love this aspect because sometimes my schedule may be a little off from friends that I play with, forcing me to go it alone. Thankfully, I don’t have to struggle through some of the tougher missions by myself, as the game allows me to team up with others when I want and still feel accomplished.

Base of Operations
Unlike most RPG style games that rely on experience gained to progress player characters, The Division puts a twist on it by linking progression to the player’s home known as the Base of Operations. While experience is still gained to increase the character level, players will need to complete missions tied to one of the three core wings, Medical, Tech, and Security. By unlocking new areas in the Base, players unlock additional skills, mods perks, and talents to use.

Personally, I loved this system as it pushed me to finish side encounters so I could finally unlock that skill I had my eye on, or open up a new critical area. It was surprisingly addictive. 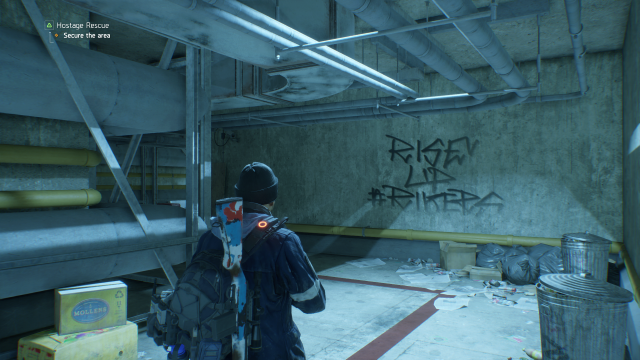 Story
I don’t exactly know what I was expecting here, but in the end, I found the story ended up exceeding my expectations for an open world style game. Since it was an open world title, I guess I was expecting there to be a greater focus placed on the gameplay rather than the story, but I’m glad I was wrong. To me, the story within The Division felt like it could have been ripped out of a typical single player focused Tom Clancy game.

Like any good Clancy book or game, The Division hits all those beats you’d expect. There’s a massive event that takes place, a person or group working to prevent or fix the situation, a big twist that hits midway through, and then a bad guy that feels what they’re doing is right. Once it gets going near the midway point, I didn’t want to stop playing the story missions. I’m looking forward to seeing where they take this franchise, because they did leave the door open either for future content or perhaps a sequel down the road.

NPC Banter
Oddly enough, NPC banter some a few quirks. Normally, this would be something I’d consider super nitpicky but ultimately, it’s an issue that rears its head quite often.

Characters such as the JTF soldiers that fight with you at times seem to have a tendency to “forget” who they’re fighting, commenting about a different faction than the one we’re all currently battling. It’s become almost laughable as I’ve even heard the same group of NPCs mention something different about all 3 factions in the same firefight. It’s weird hearing them say something about The Cleaners when you’ve been fighting the Last Man Battalion.

One time, we were holding a JTF checkpoint against the Last Man Battalion, and during the firefight one of the JTF soldiers yelled out a remark at how much the Rikers hates them. Then right after, a comment was made about how unruly the rioters had become. It’s striking at how such a little thing like this, can really pull you out of the moment. Again, it’s not a dealbreaker by any stretch of the imagination, but this is something I’d love to see fixed at some point.

So all in all, the game has lived up to my admittedly high expectations and I’m looking forward to what Massive has in store to keep this train rolling through 2016. What are some of your favorite or not so favorite things about the game? Hit me up in the comments!