Important Tips For Success In The Division

The big news last week was that one of my most anticipated games, The Division, finally launched after a fairly long development cycle. I’ve been able to put in a weeks worth of time and frankly I’m enjoying every single minute I spend in that world. I’m going to put together an impressions post soon, so I’ll hold off on the nitty-gritty details for now. Just know that it has so far lived up to my expectations. 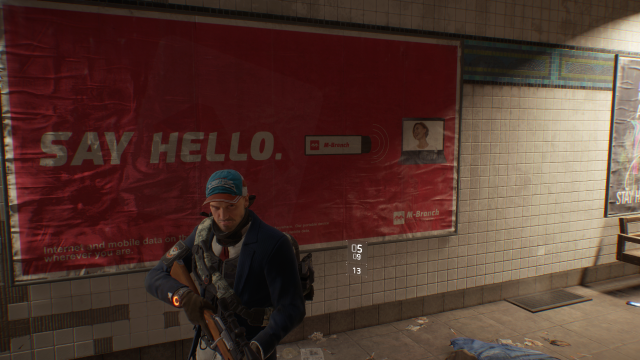 With that said, I wanted to tap into that week’s worth of knowledge and put together some tips I’ve come across which the game either does a poor job of explaining or flat out doesn’t tell you at all.

So with that said, here are some handy and important tips which will help you take back New York!

Tip 1: Side Missions = Blueprints
The Division has a fairly robust crafting system in place, letting players break down their items into crafting components or physically going out to loot and scavenge from various stores littered around Manhattan.

So how do you get blueprints needed to craft items? Side missions are key. Those light blue circular icons not only are a great way to score big EXP, but they also grant blueprints as rewards. Don’t ignore these missions, they not only help you level up fast but they also give you way more crafting options back at the Base of Operations.

Tip #2: Don’t sell gear, break it down
This kind of goes along side tip 1. I haven’t found cash to be a hugely important resource as most gear can be scavenged off enemies or through opening a random chest in the world. SO don’t sell your gear, break it down! By holding down the left stick, you can break down unwanted “junk” items into various crafting resources, which is a great way to quickly gain enough materials to create that high-end piece of gear you had your eye on.

Just…you know…make sure you don’t accidentally deconstruct a useful item or mod because it’s gone for good once the weapon is broken down. 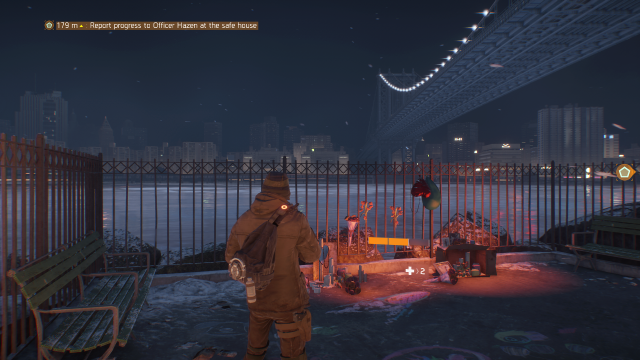 Tip 3: The Dark Zone doesn’t grant XP
The PvP enabled Dark Zone is a different kind of beast my friends. Yes, it’s littered with fantastic loot and elite mobs, but don’t expect to power level inside of this area. The Dark Zone rewards players with Dark Zone Credits and experience, something completely separate from the normal XP given in the PvE areas. This is good though, because some of the best weapons and gear in the game can only be purchased when your Dark Zone level is at a certain rank.

Tip #4 Know Your Status Effects and Consumables
Surprisingly, The Division doesn’t talk about the various status effects and how they can be countered at all. If you’re like me, your first introduction came either through a concussion grenade or flame thrower.

There’s actually a bunch of effects ranging from Bleeding to EMPs. Bleed and Burn do damage over time, while tear gas and flashbang grenades disorient the player. Finally shock grenades do damage while also paralyzing the target.

It’s worth noting that eating an energy bar not only removes any negative effects, but it also provides a handy 5 second immunity to all status effects as well. 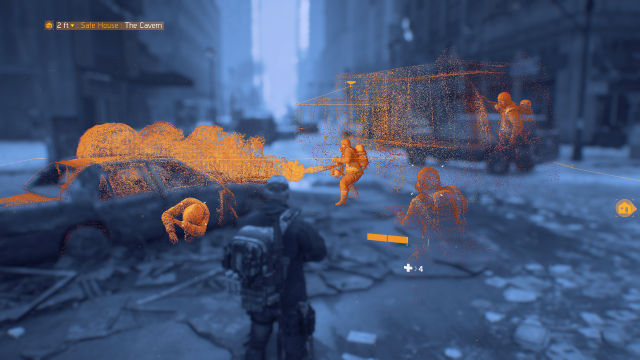 Tip #5: Don’t pay (all the) attention to the DPS Stat
I’m still not 100% on gun damage in The Division but I do know that you shouldn’t be fooled by the DPS stat when looking at your inventory or at a vendor screen. High firing guns like SMGs or Assault Rifles will have lower much higher DPS values as compared to slower weapons like a Marksmen Rifle or Shotgun which appear to be lower. This stat can be deceiving however.

You should examine each weapon to find it’s actual damage statistic. Again, weapons with a lower fire rate hit MUCH harder, so if you want a weapon that does pure damage per hit, that’s a stat which you should pay attention to.

Tip #6: Mods take up inventory space
Yes, a sad fact of life, so all of you hoarders out there beware. The best way to gain space back however is to apply them to weapons. When they’re added to a gun, they no longer count in your inventory space. Just don’t forget to strip your gun before you deconstruct or sell the gun!

Tip #7: Visit Safe Houses
Not only will this open up a fast travel location to help eliminate long travel times, but Safe Houses also contain new encounters and side missions to tackle in that district. The more you visit, the more stuff (and rewards!) you’ll have to do in the game.

There’s always two places to interact with at a safe house. Make sure to talk to the JTF officer typically behind the desk as they’ll dole out specific side quest missions, and then visit the situation board to unlock Medical, Tech, and Security based encounters to help get your Base of Operations up to speed faster.

Tip #8: Help civilians!
Occasionally, you’ll come across civilians who need your help. Typically they’ll ask for one of your consumable items or a med kit. While it would be fairly easy to ignore them and keep running, don’t! By giving them the item they’re requesting, they’ll give you some EXP and typically a cosmetic item like that pom pom beanie you’ve been searching for. Plus, isn’t always a positive showing good will towards others, even if they are a digital character?

Bonus Tip For New Players: Unlock Security Wing First
If you’re just starting out in The Division, the first thing you want to do once you unlock the Base of Operations is to tackle the Security Story Mission. Why? Unlocking the Security Wing grants you a perk that gives you a permanent 10% boost to all EXP earned. Sure, it’s a small bump but it’s one that stays with you the rest of the game, so why not enjoy the boost?

This entry was posted in Feature, Opinion and tagged Feature, games, Opinion, other, PC, PS4, Xbox One. Bookmark the permalink.

9 Responses to Important Tips For Success In The Division