Titanfall was a game that I couldn’t wait to play on the Xbox One. It was a highly marketed shooter that had a lot of positive buzz from critics and consumers alike and from what I had read at the time, the game showed extremely well at various trade shows. Not only that, it was created by Respawn Entertainment, a studio that had been founded from the core members that had left Activision’s golden goose studio Infinity Ward, the house that pumped out arguably the best Call of Duty games like Modern Warfare and its sequel.

So when the much anticipated game finally launched in March 2014, I was there on day one, experiencing the game’s version of a campaign based entirely within the multiplayer space. As I mentioned in my review, the gameplay was frenetic, fast and a whole lot of fun even if the game, sadly, didn’t do much with it’s lore.

The other main issue I and seemingly many others had with the game was with the amount of content it offered out of the gate which to me, felt limited. Sure enough, I eventually grew tired of the experience as playing the same modes and maps over and over kind of wore me down. I moved on to new games and never looked back.

In an unprecedented move last year, Respawn decided to open the flood gates once more and release all of the DLC for Titanfall for free. As a person who loves free stuff, I downloaded it all but didn’t actually jump back into the game until this past holiday break. So with almost two years having gone by since its release, how does the experience fare now?

Lets take a deeper look after the jump, shall we?

Boy, I completely forgot how much fun this game is.

Obviously, considering the game has been out for nearly two years at this point, Respawn has added a large amount of changes, updates, and fixes that were not there in the beginning and are really too numerous to list in their entirety here. Besides the obvious content additions, there’s a ton of subtle tweaks and UI enhancements which make the game flow better now than it previously did. These changes essentially allow the game to provide meaningful information to the player without distracting from the high octane action happening all around the player. All of these mix together to make an even better product.

Outside of the three DLC packs which added a grand total of nine new maps into the rotation, Respawn also added a few major additions which add a ton of value into the product. Here’s a few of the bigger pieces which were added for free over time.

Arguably the biggest piece is a new co-op mode called Frontier Defense. Essentially, you and three other players are tasked with defending an objective from an enemy onslaught. For veteran shooter players, you’ll probably get a big horde style vibe with a few twists. Players can switch loadouts at will thanks to loadout crates, or refill ammo and supplies on the fly near the objective. Turrets are earned during battle and can be placed anywhere on the map to help push back the IMC tide. Finally, players who die in battle don’t need to wait for a revive from a teammate, they’re actually flown back in thanks to a drop ship. Frontier Defense isn’t anything revolutionary, but it’s certainly fun and gives players a different type of experience than the traditional player versus player modes. 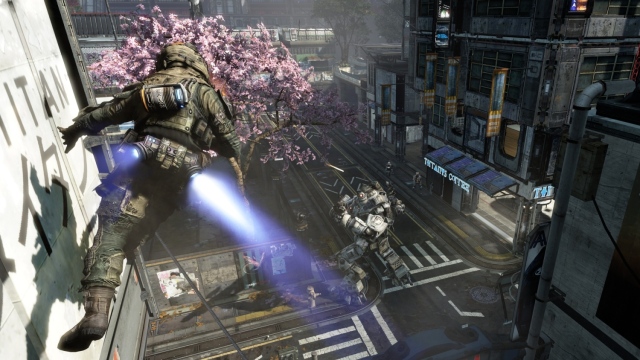 Ranked Play was also added to the game later in 2014 letting players opt in to a device known as a rank chip which basically measures their skill while playing any game mode. The cool thing is, adding this rank chip allowed Respawn to remove the need for a dedicated ranked playlist essentially keeping the player base from being fractured between ranked and casual. As players meet performance goals during a match, they’ll accumulate experience which grants new battlemarks eventually allowing them to rank up from Bronze all the way to Diamond. Interestingly enough, players who don’t earn something like 75% of a rank goal during a match will actually lose a battlemark rank. Luckily, if you opt in and suddenly get tired of the grind, you can simply turn the rank chip off and it’ll be there waiting for you when you want to start again.

Map Stars were also added in update eight and essentially they’re there to add another layer of challenge by introducing three stars to each map in every game mode. Basically, to earn a star, a player needs to hit a specific score requirement. All in all, Titanfall holds 504 total stars to unlock with a few titan insignias tied to specific stars being earned. Again, it’s not a massive addition, but it manages to add another layer for players looking for an added challenge.

Finally, in game credits were added to the game and are earned by essentially playing the game. Winning matches, selling burn cards, completing challenges, and winning all grant some sort of credit bonus for players, and better yet, these can’t be purchased with real money. What do you do with these credits? Spend them at the Black Market of course! Everything from burn cards, burn card packs, new insignia, and new Titan OS voices can all be had for various sums. Sure, this stuff is just fluff content, but the fact that the game rewards you for playing normally is pretty nice.

The biggest issue with the game now is one that is currently affecting many games that are this old: online player base. While the free DLC helped the community surge, it’s still no where near where online multiplayer games are, though that is to be expected considering how long the game has been out. While the popular modes like Campaign or Attrition still sport a healthy community, many of the other modes are now clinging to dear life with low player numbers. As more time goes by, the less modes players will have to participate in.

Although all of the added DLC content certainly help to make the game feel more complete, thew lack of a dedicated campaign to help flesh out the world and characters continues to sting. As I’ve mentioned in the past, Respawn has created a very interesting universe which absolutely deserves the be fleshed out further. Still, the moment to moment gameplay is still as rock solid as it was and thankfully the game still has a following, so finding a match hasn’t been an issue. Even for a fast paced shooter that’s nearing it’s second birthday, Titanfall still delivers.

This entry was posted in Opinion and tagged games, Opinion, Xbox One. Bookmark the permalink.