Truth be told, I’m not a big DLC sort of guy these days. By the time meaningful content drops for a game, I’ve either grown tired of playing said game or have moved on to something else entirely. Not only that, I’ve been burned by season passes before so in order for me to really consider post-launch content, I either need to have really enjoyed the core experience, or still be playing it. Outside of the Dead Kings DLC for AC Unity (which was given out for free due to the awful launch state of the game), I’ve passed on nearly every piece of DLC for Assassin’s Creed for one reason or another.

With that said, Assassin’s Creed Syndicate is a game that reinvigorated my somewhat waning interests in the franchise. I found the experience to be really fun and it’s a game that I’m still actively playing. While I’ve enjoyed the past couple games in the series, none of them struck a chord with me like this one has. Just recently, the first major expansion revolving around the infamous killer Jack the Ripper launched and it looked too good to pass up another chance to run around London.

Did I make a good choice? Here’s what I think of Syndicate’s Jack The Ripper content…

Before I get going here, let me just say that I’m going to do my best to avoid spoilers in the core game and here in the DLC. Lets be honest here though, this is an impressions post for content that takes place 20 years after the main game. There’s probably going to be a few things here or there which may be considered spoilerish, so you’ve been warned. Seriously, don’t blame me if you read something you can’t instantly forget.

Things pick back up 20 years after the main events of Assassin’s Creed Syndicate and players quickly see that the city of London is deep into the reign of terror that was Jack the Ripper. The story centers around a 40-something Evie Frye, who is called back to London by her brother Jacob after he goes missing during an incident with Jack. It’s up to her to piece together what happened to her brother along with putting a stop to Jack’s menace in the boroughs of Whitechapel and London City. There’s a very interesting backstory to Jack and what he’s up to, but I’ll leave the rest for you to discover.

Players will instantly feel comfortable in this world as the controls and gear that Evie has access to is exactly the same. The world is much more grim and atmospheric and the lighthearted humor that was prevalent throughout the main campaign takes a back seat here. The color palate of the environments also feel a little more muted than in the main game which gives off an feeling of uneasiness, perfectly fitting for the violent subject matter at hand. Unlike the main game, players no longer have access to Jacob for obvious story reasons and many of the skills are no longer active such as Evie’s Chameleon ability. Interestingly enough though, there is a second character players will utilize, though it’s probably not who you expected: Jack the Ripper.

That’s right, Jack is playable in this DLC and his approach is vastly different from Evie. It’s almost like playing as a giant and fighting little ants. That’s not to say Jack is invincible, but with as savage as Jack is and the fear he instills in people, you absolutely feel a sense of power playing as the murderous villain. Assassin’s Creed is a series that promotes stealth, but when playing as Jack I found myself wanting to just walk into a group of enemies instead. What I found really interesting when playing as Jack is how Ubisoft managed to capture and convey his fractured mindset to the player. His broken psyche is periodically displayed through screen flickers, demonic sounding voices, and even text displayed on the screen such as “Leave No Witnesses” and other ominous sentences. It’s chilling and fits the character perfectly.

In this world, fear is a big motivator and it’s a tool that both Jack and Evie utilize, though in much different ways. Jack has a style based around brutal killing (obviously) and uses fear to give him the upper hand on opponents. The more mature Evie on the other hand prefers to be as non-lethal as possible, using fear to avoid conflict by causing enemies to flee or if confronted with combat, knocking out enemies. This difference can easily be seen by the use of new melee spikes, where Evie will pin an opponent’s limb to the ground with them, Jack will stab a person through the gut, leaving them screaming as they bleed out. I told you this content was brutal, didn’t I?

To aid in this new fear campaign, players gain access to new gear like the fear grenade, spike, and fighting karas. Fear has two stages, anxious, and full blown terror. When enemies are terrified, they’re more likely to friendly fire and flee completely. The fear grenades are pretty much what you’d expect, unleashing a screech type of noise and an orange mist which terrifies enemies. Spikes are a melee weapon that essentially pins an enemy to the ground while the orange mist causes them to scream in terror. Lastly, brutal combos can be used (by Evie’s karas or Jack’s ripper blade) to not only take down your opponent, but frighten nearby enemies as well. I’m not sure what the orange mist is, but I’m thinking it’s some sort of fear toxin that would make The Scarecrow from the Batman franchise proud.

One of the bigger surprises for me is that this DLC feels meaty and worth the price of admission. In a world where post-launch content can sometimes not last much longer than an hour, the Ripper DLC contains a handful of core missions, new activities to partake in, and a ton of side missions which don’t repeat the same content found in the core story. Some of the side missions involve stealing cargo shipments, using fear tactics to root out impostors, and trying to save prostitutes from Jack’s loyal minions. The twist there is that the prostitutes can die if Evie is detected during infiltration, potentially adding a layer of guilt if you mess up.

It’s not all sunshine however, as I did come across a handful of technical issues. None of them were game breaking by any means, but I did see some odd NPC pathing issues and odd glitchiness moments like an enemy who was intending to sit on a staircase but instead looked like their body was being contorted into a pretzel. There’s a number of small things like that periodically, but again, it’s not something that will negatively affect your experience. 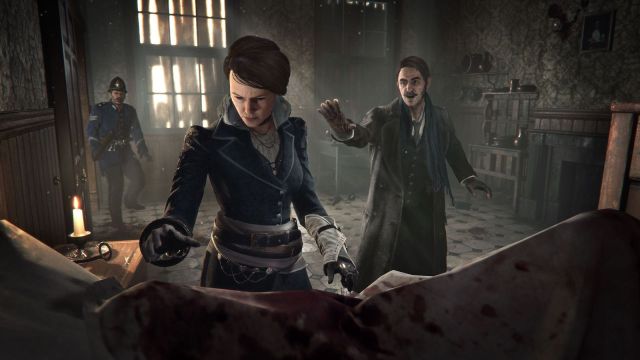 Outside of that, I really would have loved to get a little more customization options like we saw in the main campaign. With Evie, players can unlock six new skills, craft two items, and unlock a handful of new gear like the assassin gauntlets, outfit color, brass knuckles, and pistol. Unfortunately, you can’t change Evie’s outfit and you no longer have a weapon choice as you’re stuck using brass knuckles for the duration of the game. Sure, it’s a small knock that doesn’t really affect gameplay, but after how well the crafting, progression, and customization options were handled in the main game, I would have loved to have seen a bit more in this DLC.

Overall, I’m a big fan of this new DLC and am glad I took the plunge. Ubisoft has done a wonderful job putting a new spin on the classic Jack the Ripper tale, while freshening up some gameplay elements from the main game. If you’re a fan of Syndicate in general, this is an easy purchase for sure. It certainly won’t change your mind if you’re not a fan of Assassin’s Creed, but it’s easily one of the best DLC expansions Ubisoft has put together yet. Certainly makes me curious to see what the other two DLC packs have in store, that’s for sure.