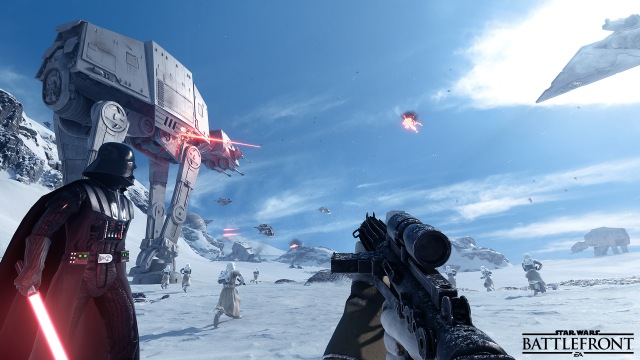 The Battlefront series holds a special place in my heart, being a series that not only was wonderfully crafted by the talented folks at the former Pandemic Studios, but it was a game that was heavily played by myself and friends during my college years. When Battlefront 2 hit, a bunch of us decided that making a Gamestop run was much more important than attending that night’s Intro to Sociology class. It was a wise choice.

But you’re not here to listen to my history with the franchise, no, you care more about what EA and DICE are doing with the franchise. With the beta taking root last Thursday and being completely open, I took the liberty to download it on both the Xbox One and PS4, just to see if there was any major differences.

Thankfully, the experience looks to be a good one, even with some blemishes during the beta.

First off, I don’t think I can accurately convey how gorgeous this game looks, even on consoles. The lighting and visual effects are astounding, really nailing that classic Star Wars vibe. Blaster shots create sparks like you’d have seen in the movies, snow and dirt kicks up as you’d expect, and the shadow and lighting is just incredible. The maps themselves are varied and interesting to look at (more on that in a bit).

DICE has really nailed the Star Wars look and feel as well, taking a lot of inspiration from the classic movies (4, 5, and 6) for the sound effects, visuals, and character models. The laser fire looks ripped right out of Episode 4 and hearing familiar sound effects really nails the feeling that you’re involved in this universe. The menus are also crisp and clean, with loading menus displaying high resolution images of various characters or vehicles like an AT-ST or Boba Fett in front of a white backdrop.

The beta came stocked with 3 modes, a co-op/solo surivial mission set on Tatooine, 40 player Walker Assault on Hoth, and Drop Zone set on a new planet known as Sullust. Survival was more fun than I anticipated, even just going up against 6 basic waves of enemies, though in that state it’s not something I would feel compelled to play over and over again in it’s current state. With more maps, unlocks, and more waves of varying enemies, that feeling could change however. 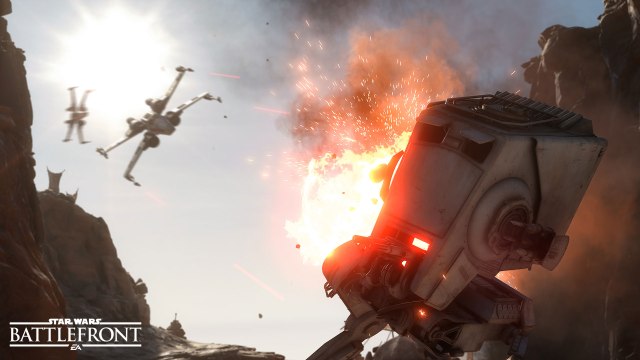 Drop Zone was probably my favorite mode out of the three mainly because Sullust is stunning. Featuring a unique and varied look, the planet has a combination of dirt, crashed spacecraft, and volcanic rock. The way the lighting hit the textures and the smoulding areas of volcanic ash was just so impressive. The map was also well made, featuring a lot of craggy hiding areas, plenty of vertical elements and completely unique looking areas. Capturing drop pods against a smaller player base was also a lot of fun, and I found the experience to be something different each time I played.

Walker assault was alright, though I have to admit, Hoth was a bit bland. Yes, the snow looked impressive and the way the blaster fire kicked up the snow was awesome to see. DICE has tried to really nail the small details and it shows. Unfortunately, the map itself isn’t nearly as fun to move around in mainly because it’s so flat. This also highlighted the other thing which bothered me a bit, in that any and all guns had ENORMOUS range to them. Standard blaster rifles could easily pick off enemy players from long distances, rivaling sniper rifles in other first person shooters. It seems odd to me that even something like a laser pistol was capable of hitting targets from a long way away. This also made combat tough on this massive map which featured long lines of sight, causing confusion on where you were being shot from.  I found this mode to also favor the empire faction as most games would end in rebel defeat. DICE needs to go back and do some balancing I think.

Each map had power ups scattered around which would grant a bonus or ability when picked up. I really enjoyed this feature and the good news here is that DICE balanced them well so as to not litter the ground with them causing all sorts of chaos. Guns also feature active reload, though it’s so sneaky, you’d be forgiven if you missed it. Essentially, guns don’t use ammo, they overheat if fired continually. When the cool down bar enters a small yellow area, pressing X or Square will instantly cool the gun down, skipping the animation. This is a great feature, and honestly, I’m a bit surprised more companies have not jumped on the wonderful idea made famous by Gears of War.

Hero characters were also included though I never found the appropriate pick up to be able to use one of them, so I can’t speak to what it’s like playing as Darth Vader or Luke Skywalker. I will say that it’s terrifying and thrilling to see the enemy hero running towards you.

One thing that did bother me however is the fact that Hero characters just kneel down when they’re defeated. It’s a bit odd and looks very strange when you consider that they’re just deciding to sit down/kneel on an active battlefield. I understand that DICE can’t show these characters “dying”, but there has to be a better way to “remove” them from the map, right? Force jump away? run off into the distance? Anything is better than just kneeling down and hanging out for like 30 seconds. 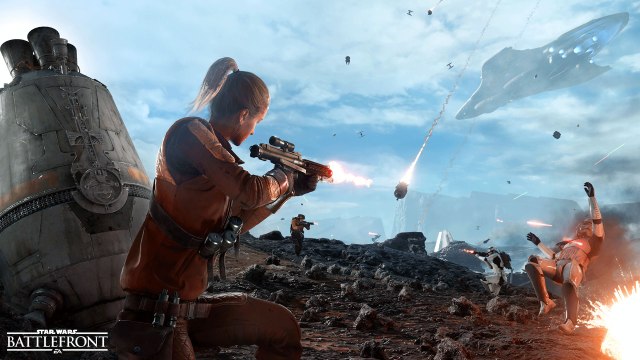 I managed to participate in both console versions of the beta as I was mainly curious to see how both ran against one another. According to Digital Foundry, the PS4 version performs slightly better coming in at 900p resolution when compared to 720p for the Xbox One. Honestly though, after playing both, it’s really not all that noticeable. I found the experience to be pretty identical on both consoles.

On the Xbox One side, I had numerous connection and server related issues, especially when trying to connect to Drop Zone matches. I’d see disconnect errors quite often on the first day, which was disappointing.

It’s at this point that I’d bring up the fact that this is still just a beta and things like this happen. I would have said that except that this is EA and DICE we’re talking about and there’s a long history that cannot be ignored here. The past few Battlefield games DICE has released suffered through online and server connection issues all of which were prevalent during the beta period as well. I have a hard time thinking EA would not do everything in their power to make sure that doesn’t happen with an IP like Battlefront, part of me remains nervous about it. Still, I’m hoping for the best.

Still, the experience did improve as the online issues mainly dissipated, though small hitches and stutters continued every now and again. Overall though, the experience was pretty smooth, I just hope EA and DICE are over planning because I can’t help but feel those servers are going to get pounded on day one by the initial crush of eager players trying to gain access all at once.

Overall, I was happy with the beta. The game looks stunning and absolutely nails the Star Wars vibe from the look, the sounds, and the music. Everything comes together to create a fun vibe. With that said, none of the modes felt like the traditional Conquest mode from previous Battlefield games so fans who want a 1 to 1 experience won’t be satisfied. From what I’ve read, Supremacy, where both teams fight over five control points seems like it could hit that mark for classic gameplay moments. Either way, there’s only about a month left until we find out.

For those of you that jumped in, let me know what you thought of the experience.