The Witcher series and I have never had a great relationship. I’ve heard endless stories and praise heaped on the titles over the years and with it being an action/RPG set in a Medieval style world, it’s a franchise that I’ve desperately wanted to enjoy. For one reason or another, it just hasn’t stuck. Considering that at the time, I didn’t have a super computer able to run the first game, The Witcher 2: Assassin’s of Kings was my first foray into this world of magic, beasts, and Medieval style war. The atmosphere, graphics, and characters were all top notch and really impressive. Unfortunately though, I couldn’t get control of the game’s tricky combat systems, which constantly left me frustrated and less and less excited to boot the game back up each night. Eventually, I gave up, moving to other titles that had released instead.

Even with all of the past disappointment, I continued to follow the development of The Witcher 3: Wild Hunt closely ever since it was first announced back in Game Informer. With not too much on my plate at the moment, I decided to give the franchise another shot and after spending a few hours inside this world, I’m really glad that I did.

The Witcher 3 picks back up with Geralt of Rivia, famed Witcher and somewhat of a badass, looking for a woman named Cirilla. As it turns out, Ciri is also a Witcher who grew up under Geralt’s care and is somewhat of a daughter figure to him. Unfortunately, Ciri’s disappearance is linked to a deadly group known as the Wild Hunt seeking her for her special abilities.

Even with a game as big as this one, the core story line has been pretty entertaining so far. Not having a solid background on many of the characters or the world history hasn’t gotten in the way either. So if you’re like me, don’t be afraid of the game. Sure there’s some things you won’t understand, but for the most part, you won’t be lost. This is still a great starting point, even though it’s technically the third game in the series.

One thing that’s for sure however is that CD Projekt RED has a knack for presentation. The Witcher 3 remains absolutely beautiful and the massive world you’re placed in is mesmerizing. All these screenshots in this post? Those are ones I’ve taken during my time in this world. The game looks so good, that I really hope they manage to add in a photo mode at some point. 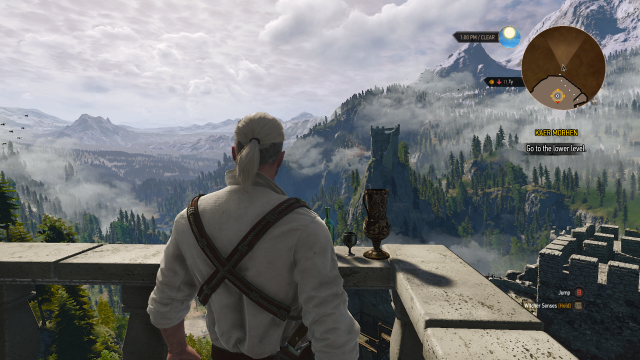 The world is seriously huge. I’m only in the second area of the game (Velen) and this landscape alone is bigger than many other open world games out on the market. I feel like I’m going to be in this region for a very long time and surprisingly I’m quite okay with that. Even with how large the world is, Wild Hunt always gives you things to do. From a mountain of quests, side missions, ambient activities, treasure hunts, and bounties to complete, players are given absolute freedom to play the game how they want. Load screens are minimal, pretty much reduced to cutscenes or loading after a death. That’s quite the achievement. If players don’t feel like walking the land, Geralt’s horse Roach is always just a whistle away or if you’re a fan of water, you can swim or get in a boat to sail to different parts of the map in real time.

I’d just take a minute here to say how refreshing it is that you can simply hold down a button to have your horse continue run and automatically follow the road you’re on. It’s a feature I didn’t even know I wanted but will now be glaringly obvious in other games that don’t have it. Not only that, when Geralt is with an NPC, that character will walk/run at the same speed you do which makes quests that have you follow someone so much better. Never again will you have to wait for the NPC to catch up before you can continue along. Kudos to the development team on alleviating those typical game related annoyances.

I’m either at or just under 20 hours played so far and with as much stuff that’s being thrown at me, I don’t feel overwhelmed or pressured to finish the main story line. In the past, massive games like this would eventually leave me bored or uninterested in seeing everything the game has to offer. After a certain point, I felt like I’ve had to race through the final few missions just to say I’ve finished the game. That’s my overall fear with this one considering that some estimates push the total gameplay time beyond 200 hours. So far though, I’m absolutely enjoying my time within this world, as dreary as it may be. 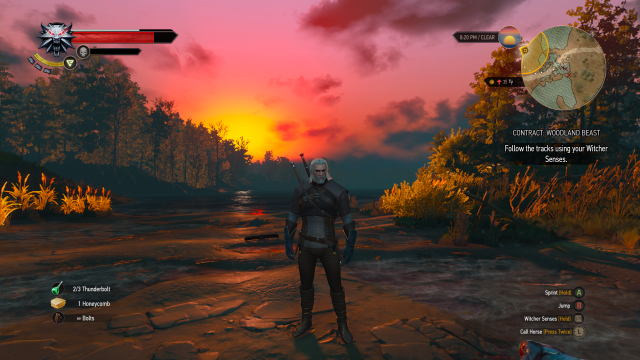 You can certainly tell why this game was delayed multiple times. Witcher 3 is a game that doesn’t waste your time. No matter how small the quest is, CD Projekt RED has managed to make everything meaningful in some way. I’ve yet to come across a quest that has me killing ‘X’ amount of monsters or collecting ‘X’ amount of items. Each quest or activity in this game feels specifically crafted to not waste the player’s time with filler or padding intended to artificially increase the game’s length. It’s really astounding.

My biggest fear coming in after my time with the second game was the combat. I had a lot of issues figuring it out in the last game, to the point where I just lost interest. I can’t put my finger on what exactly it was, but ultimately, the combat in Wild Hunt feels excellent. It manages to straddle the line between forcing the player to be tactical and super agressive. One thing is for sure, button mashing will get you killed, so you’ll need to use all of Geralt’s abilities in combat. What’s better is that when you approach a fight, Geralt will automatically select the correct sword removing any of the guess work. Against monsters, he uses a Silver Sword, and he has a steel weapon for non-monsters/human opponents.

So far, I haven’t run into any huge issues which was moderately surprising considering the scale of this game. Sure, there’s a few minor annoyances but ultimately, the experience remains rock solid. If I had to highlight a few things, some of my complaints would be with the clunky menu UI which ends up becoming a confusing mess after the player manages to pick up a bunch of items. The game also likes to hold onto books and documents that you may pick up, making it tough to figure out if it’s something you actually need or can get rid of. There’s unfortunately no sorting order to these screens either so prepare to have your crafting and alchemy section bursting with items that you have no idea what they do or are for.

I’ve seen a few NPC pathing issues where the character will get stuck in the landscape or stand on air for example, but even then, in a huge game like this, that’s kind of expected. These events are not common and really have no negative impact on my experience outside of giving me a chuckle.

As someone who hasn’t been able to get into the previous Witcher games, believe me when I say the hype is real with Wild Hunt. CD Projekt RED has done a great job not only sticking to the franchise values, but adding in features or updating game systems which can also appear to people who are not Witcher veterans. If you’re at all on the fence, give it a shot. I’m having a great time so far and I don’t see that changing anytime soon.

5 Responses to The N00b Perspective – The Witcher 3: Wild Hunt Impressions