I try to not post things about season passes and other things like that here mainly due to the fact that it’s information you can quickly and easily read elsewhere. I try not to waste your time when you visit the site. I will admit though, when I saw what Ubisoft was pushing out for the season pass with Assassin’s Creed Unity, it kind of got me thinking a little bit. While you’re still getting their normal offering of a story DLC expansion, additional items and the preorder DLC packs, Unity is also coming with another unique item.

In addition to the story DLC, you’ll also gain access to over 30 new items such as weapons, gear, and skills for Arno and the three pre-order bonus missions: Chemical Revolution, Killed by Science, and The American Prisoner.

The thing though that really caught my attention however was the final piece of the season pass. Assassin’s Creed Chronicles: China is a brand new 2.5D side scrolling title set in China. Following the adventures of Shao Jun after returning to her homeland from Italy (following the events of Assassin’s Creed Embers), she seeks revenge against those that destroyed her brotherhood. 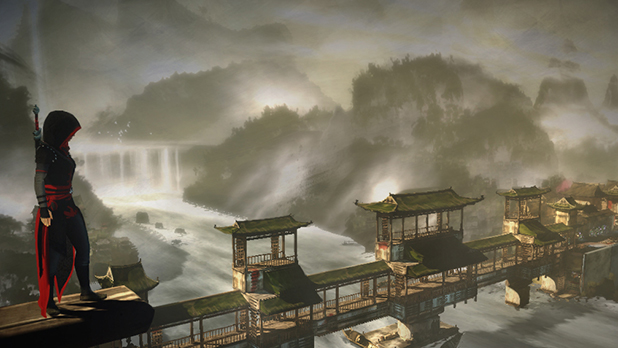 What interests me most about this downloadable game is the fact that it’s a stealth action side scroller and completely changes the way you think about Assassin’s Creed. From the small glimpses of gameplay seen in the trailer above, it kind of has a “Mark of the Ninja” vibe going on and that’s pretty intriguing. Apparently Shao Jun has access to all new weapons and skills including a foot blade which you can quickly see in the gameplay. The visual design was inspired by traditional brush paintings and is being developed by Climax Studios in collaboration with Ubisoft.

I don’t know about you, but I got a strong Prince of Persia vibe seeking that gameplay as well. I wouldn’t mind seeing that franchise revived in this style down the road. Think of that style of game with the gameplay from something like Shadow Complex or Mark of the Ninja. Are you tingling from excitement yet?

For those wondering, the season pass will be available for $29.99 on PC, Xbox One, and PlayStation 4. Assassin’s Creed Unity hits stores and consoles on November 11.

This entry was posted in News and tagged games, news, PC, PS4, Xbox One. Bookmark the permalink.