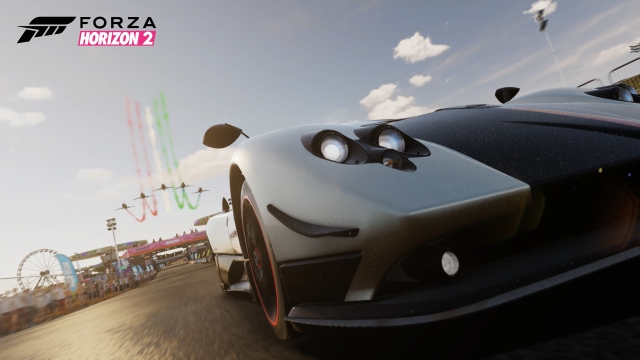 Put me behind a virtual car and there’s only three rules I follow:

1. Drive fast
2. Smash my way to the front
3. Have fun and cause chaos

I guess that would explain why simulation racing games like Gran Turismo and Forza have never stuck with me while games from the Burnout franchise and even the newer Need for Speed games have. The sim racers are too technical for my tastes and require more precision than I want to give them. I can appreciate those games for what they are and everything they bring to the table, but on the whole, I’ve never been able to get into them.

The Forza Horizon series came along a couple years ago twisting the typical simulation angle into something resembling more of an arcade style racer. You could even call it the Peanut Butter Cup of racing games, mashing together two good things into something new. Continuing with the party meets cars theme from the first game, Horizon 2 puts players into a new festival in Europe. With the demo for Horizon 2 now out in the wild, I couldn’t wait to take it for a joyride.

Did it satisfy my rules? Find out after the jump…

The first thing that immediately hits you when the demo boots up is just how gorgeous the game is. The presentation and visuals are absolutely stunning. If you want a showpiece for your Xbox One, Horizon 2 delivers in spades as level of detail and polish that is present in the demo is awe-inspiring. While starting a race, I noticed these concrete blocks with the words “Horizon” painted on to them. I was blow away by how realistic these blocks looked as you could see the individual texture of the concrete through the paint. It’s such a little thing, but in a game like this, you can see how much time and effort was put into it. Everything from the roads, to the water, to the skyboxes, and the stunning cars themselves make you think you’re watching a blu-ray movie or something. Kudos to the studio.

The big thing you’re probably wondering now is how does it play? Horizon 2 is billed more as an action racer and to that end, it’s very true. The demo space alone is massive and features an impressive diversity in the landscape with a massive draw distance. While looking gorgeous, I took part in race events that had me racing through dirt trails, smashing my way through vineyards, and all sorts of other things that you just wouldn’t probably see in a traditional Forza Motorsport game. My big problem was with the car handling. At certain speeds, turning the wheels slightly would make me ultimately lose control of the car. Granted, some of that is on me as I’m still trying to play this like the more forgiving Burnout games. There’s definitely a learning curve going on especially with the more high-end cars like the Pagani Huayra and Lamborghini Huracan which is the first car you get to drive.

Braking around corners and keeping cars under control? These ideas are completely foreign to me.

Before a race you have the ability to tune your car. I dove into this menu and was immediately overwhelmed with choice and options. Now for someone who’s a car fanatic or a fan of sim racers, this menu will probably be heaven. To me, a complete novice to Forza, it scared me as there were so many settings and things I could customize, I felt like I would be at a disadvantage if I didn’t customize it correctly for the type of race. There’s a block of text on the right that does explain what the setting does and what happens if you adjust it one way or another but it’s still incredibly technical and may turn some people off. I’m hoping that tuning isn’t a necessary part of the game, as I really just want to race and have fun.

What I loved about the demo is that even if you’re playing by yourself, the world you’re in is populated by other cars representing your friends list. Doing a bit more research, I found out that these are not just place holder cars, they’re actually your friends Drivatars, which are AI cars that have actually learned how your particular friend drives and almost becomes a clone of them. So it’s kind of like you’re driving with your friends even when they’re not online.

The demo also has full online connectivity, but I didn’t actually try this feature out so I can’t really report on it. Still, I’m impressed that so much content has been packed into this demo, it really gives you a great look at the game almost like it’s a preview.

Forza Horizon 2 is a stunner. It feature jaw dropping graphics, a fun vibe, and wants you to have a good time while playing. All that is obvious. If you’re a Forza fan, there doesn’t seem to be a reason why this game shouldn’t be on your radar. While an action racer fan, Horizon 2 did surprise me in a good way. Even though I’m not terribly good at it and can’t seem to keep most cars on a road for very long, I feel like it managed to blur the line between simulation and arcade style racing games. I have no idea if I’m going to end up buying it, but the demo has, at the very least, put the game on my radar. I never thought I’d say that about a Forza game before.

This entry was posted in Opinion and tagged games, Opinion, Xbox One. Bookmark the permalink.