As the flood of pre-E3 news continues, Guerrilla Games, the guys responsible for the Killzone franchise, have announced their next major DLC update to the PS4 exclusive, Killzone Shadow Fall. 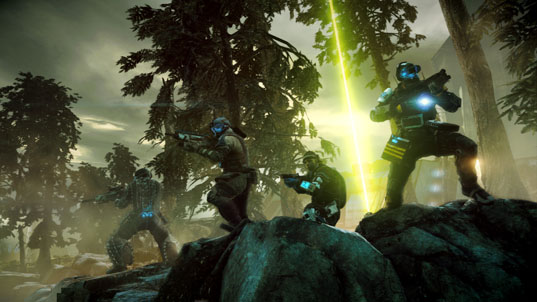 In an interesting move, Guerrilla is close to releasing Killzone Shadow Fall Intercept which adds a brand new four player co-op mode to the game. In this mode, players will be trying to intercept and relay Helghast transmissions back to the VSA headquarters. While the Helghast fight back against you, you and your team will need to fend them off long enough to establish a hacking uplink to transmit the data.

Players will also have access to four different classes (Assault, Medic, Tactician, and Marksman) as they work together to increase a “Team Score” which also acts as the hacking uplink meter. The more points you gain from defending your uplinks from the Helghast, the closer you get to achieving your objective. Players can also choose to “bank” their personal score points and unlock bonuses such as jetpacks and artillery strikes. Losing an uplink and respawning will lower the team score and if the overall score is too low to allow for respawns, you lose.

The DLC comes with four maps and retooled enemy AI. The Helghast work as a team supported by their own distinct classes and even have the ability to call in “Champions” based on key Shadow Fall characters from the campaign. Intecept launches in June for free for season pass holders. No DLC price has been announced quite yet, but a retail version has been promised for later this year if you’d like to go that route instead.

This entry was posted in News and tagged games, news, PS4. Bookmark the permalink.