There’s just something great about games that empower the player to be something more than ordinary. Sucker Punch’s inFAMOUS franchise is at it’s best when giving players the tools to go and do what they want in a big open city. With the highly anticipated Second Son now on store shelves, the franchise finally moves into next generation territory and with it comes a brand new game engine, character, abilities and setting for players to play around with. Even with all this new tech powering the title, morality and story have always been a major focus and Second Son is no different, introducing these elements through a more realistic tone and topics centered around the freedom vs security debate.

Is Second Son a worthy successor to Cole’s legacy or should it be purged? Full review after the jump.

Second Son picks up about seven years after the “good” ending to inFAMOUS 2. The world is a pretty different place now with Conduit’s inspiring fear among the populace rather than emotions related more towards mystery or hope. In response to these newly nicknamed “Bio-Terrorists”, the government created the Department of Unified Protection to deal with the threat and to eliminate and potential large scale disaster seen in the events of the last game. The D.U.P. have set up security checkpoints, scanners, and a whole host of privacy invading techniques to find the conduits that are hiding among normal society.

Taking place in Seattle, Washington, players are introduced to Delsin Rowe, a graffiti artists and outcast of sorts who’d rather goof off than put in an honest day’s work like his brother, Reggie. After an accident and a tragic event occurs outside Delsin’s Akomish tribe’s land north of Seattle, Delsin takes it upon himself to bring an end to the D.U.P. and their tactics. It’s up to you, the player, to determine how that happens.

I found the characters to be particularly engaging this time around leading off with Delsin Rowe himself. Initially coming off as an unlikable rogue, as you play through the course of the game taking him along his path, you grow along with Delsin. Voiced by Troy Baker who gives Delsin a sort of charm and humor, I came to really enjoy my time playing as this character. The supporting cast is equally as great along with a very strong villain character that you just love to hate. I will say that I was disappointed to see a number of characters who were a bit underused or could have used more screen time. Abigail “Fetch” Walker fits this criticism well. I found her to be very interesting and it seemed just as you’re getting to know her better, she’s gone until the end of the game.

Gameplay in Second Son will be very familiar to inFAMOUS veteran’s as you still have a big city acting as a sort of virtual playground complete with missions and activities to check out. The big draw in Second Son however are the powers themselves. Ditching electricity completely, Delsin has the power to absorb abilities from other conduits, so through the course of the game, you’ll gain access to four in total. I won’t spoil them for you here outside of what has already been revealed with Smoke and Neon. 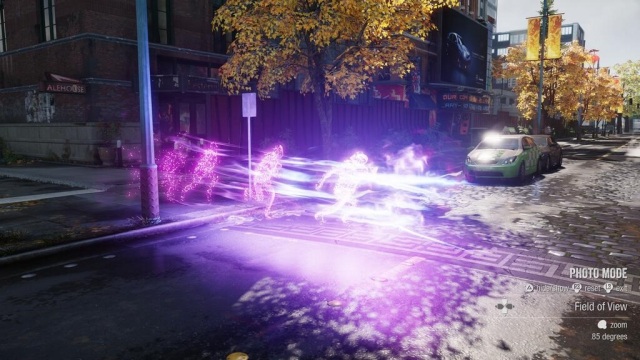 Initially I wasn’t so sure about juggling multiple powers, but Sucker Punch really simplified things so as to not overwhelm the player with control schemes. Each power can be changed on the fly by simply absorbing whatever material you need. So for example, if you want to use Neon, all you need to do is absorb an object that uses neon lighting like from a sign or even some cars who have a neon light body kit. It works really well and gives players so many options before and during combat. I never felt overwhelmed and the controls are simple enough that I never had to pause the game and figure out what combinations did what.

Each power has a specialty use with neon being the more precise set of powers and smoke being a sort of destructive set. Interestingly enough, each power comes complete with a upgradable skill tree letting the player customize Delsin a bit more to cater to their play style. Depending on your karmic alignment, powers also branch out with “evil” and “good” options which altered the core functionality of each power. For example, good neon players can slow time briefly for precision shots, while evil neon players could actually make enemies explode into neon energy causing more collateral damage. Karma Bombs are ultimate, screen clearing moves that need to be charged by doing good/bad deeds through random opportunities around the city. These moves are extremely impressive and worth the time it takes to charge the move up.

With that said, not all is as rosy as I would have hoped. Like the past two games, the city is Seattle is divided up into specific zones on the map each under control of a particular D.U.P. home base. Each zone can be cleared out by completing side missions and clearing the HQ located there eventually resulting in the city being “taken back” from D.U.P. control. Unlashing destructive power and watching D.U.P. structures explode and break apart is great fun however, I found the other side missions to be disappointingly short and overly simple. Outside of clearing out the bases, Delsin will need to collect a few blast shards from flying drones, take out an undercover character, find a hidden audio file, and destroy a hidden camera. It’s worth noting that all these things take place in a small radius around where the mission began so it’s not like you’re searching the city for them. These missions realistically can be completed in a minute and truth be told, are not terribly fun. It feels like a step back from the previous two games. Thankfully, this criticism does not extend to the main missions which I found engaging and completely worth my time. 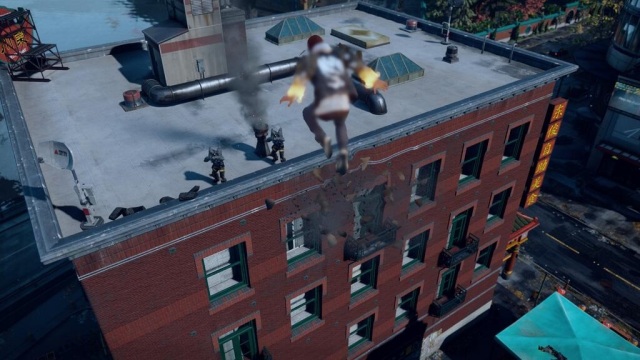 As in past games, parkour and traversal are major elements to Second Son as Delsin can climb buildings, shimmy across ledges, run and jump to objects in this world. What’s very apparent is that these moves seem to be less “sticky” than in previous games. More than once I had issues getting Delsin to land on or grab particular surfaces. It’s moderately frustrating especially when you’re trying to land a precision jump on a structure surrounded by water but the issue does get masked a bit as you unlock new powers and rely less on parkour moves to traverse. Neon is a life saver as you basically turn into the Flash as you sprint at super speeds along roads and up buildings.

Choice has always been a major focus of the inFAMOUS franchise and that doesn’t change here with Second Son. Delsin is constantly faced with choices which ultimately alter the story based on how you’re playing. If you’ve played an inFAMOUS game before, this is nothing new. Different abilities and powers become available based on your alignment along with how the story plays out.

What disappoints me about these decision points it how binary they remain. The choices presented to Delsin through the campaign are very clearly “good” or “bad” and to me, that’s a bit disappointing. I would have loved to have seen Sucker Punch introduce a “gray area” into the game, presenting players with more open ended and interesting choices which better reflect who Delsin is as a character. When we first meet him, he’s sort of the outcast of the tribe, a rebel without a cause. The choices in game tend to be more straightforward and simple ranging from trying to redeem a character to outright murder which just doesn’t seem to jive with the theme. Some “evil” actions are just too extreme that it seems to be a disconnect from Delsin’s character. If there’s another inFAMOUS game down the road, I firmly feel that this system needs to be overhauled.

For me, I just don’t think the decisions really had a massive impact like I think Sucker Punch was hoping. Generally the choice comes down more to how you’re playing the game instead of deciding the best option right then and there. In my opinion, the good/bad karma system prevents the player from really creating a unique experience as you’re going to make a decisions based on how you’re trying to play rather than how you personally feel about the situation. There’s absolutely no sense in playing both sides as doing that would ultimately prevent you from increasing a meter to unlock new abilities geared towards a specific karma direction.

Visually, Second Son is stunning. Character animations are just outstanding and really help the player to get absorbed into this world. Sucker Punch has created a show piece game for PlayStation 4 owners as it’s easily in the top 3 for best looking next gen games so far. The subtle facial expressions alone are astounding which make each character you come across very believable as you’ll be able to see subtle expressions in the face and know exactly what a character is feeling or thinking. Weather effects and expert lighting also really help bring the city of Seattle to life.

The audio side of things is equally as impressive featuring another well made soundtrack along with magnificent sound effects and voice acting.

As a side, one aspect that I absolutely love about this game is the recently added “Photo Mode” which essentially allows you to pause the game and use a user interface to apply things like filters, blurring effects, camera positions, and other tools to create some really spectacular photos. The game engine is downright visually stunning which makes this such a wonderful addition. The screenshots you see in this post are all ones I’ve taken during my playtime.

So by this point, you’re probably wondering, “Is it worth picking up?”

The short answer is yes, definitely. I mean, what else are you playing on the PS4 these days? Outside of the games shortage, inFAMOUS Second Son is a well made game and looks downright gorgeous even with it’s flaws. It’s not my favorite title in the franchise, but there’s absolutely no denying that it’s downright fun. inFAMOUS Second Son may not be the revelation we were hoping for with next generation action games, but as of right now it’s still one of the best titles the PlayStation 4 has to offer.

This entry was posted in Review and tagged games, PS4, review. Bookmark the permalink.