Certain games evoke a particular response from players almost like we’re one of Pavlov’s dogs. Upon hearing or seeing a certain cue, players are then expected to feel a certain way. In Titanfall’s case, upon hearing the phrase “Your Titan is ready” followed by me calling down a streaking metal object crashing down to the earth, I felt this rush of excitement. Every single time, it never fails.

Titanfall is the first game from former senior members of Infinity Ward, Respawn Entertainment and with it comes about nine months of hype. Coming from the former Call of Duty guys, high expectations were placed on Titanfall right from the get go when it was officially revealed at E3 2013. I can’t imagine the pressure the team faced in an effort to convince people that this was more than another stale military shooter or just a Call of Duty with mechs type of game. With an uphill battle ahead of them, does Titanfall live up to the hype or is it destined for the scrap metal heap?

Some of you may be surprised to learn that Titanfall does indeed have a campaign and story line. Instead of a traditional single player storyline, Respawn has created an online campaign where you and other players live out the missions on either side of the conflict. You play a nameless Pilot class soldier in a war for either the Militia faction or the IMC (depending on which side the game places you on). The Militia is led by former IMC officer, James MacAllen intent on stopping the harsh practices of the Interstellar  Manufacturing Corporation and their leader Vice Admiral Graves.  You see, the Militia is upset that…you know what? It doesn’t really matter in the end.

After the campaign had ended, I didn’t really have a better sense on who these characters were or ultimately what they were fighting for outside of not liking each other. It’s sad really because this is a game featuring interesting concepts, detailed maps, and the massive potential for really creating a cool sci-fi story line. Unfortunately, whether intentional or not, the story never really comes together. The nice aspect is, win or lose, the campaign will continue on until you finish it as your assigned faction. I really appreciated not having to play the same mission over and over until my team got a win so we could move along.

If you’re buying this game to get lost into it’s universe, well, you’re going to be disappointed. Yes, there is a campaign mode, but the story relies heavily on actual gameplay made up of attrition (Titanfall’s version of Team Deathmatch) matches with a couple Hardpoint Dominations (territory capture) thrown in. Ultimately, running through the nine match campaign on one side won’t take you very long (maybe 2 hours at most for one side?) and for me at least, I wasn’t left with any real sense of discovery or fulfillment on either faction. The story is paper thin and honestly, that’s alright because it’s the gameplay that really props this game up.

Out of the box, Titanfall ships with the nine mission campaign (18 if you play both sides of the conflict) and 5 additional modes: Hardpoint Domination, Attrition, Last Titan Standing, Pilot Hunter, and Capture The Flag. These modes are basic variations on classic shooter modes such as Team Deathmatch and Domination style modes, but they’re enhanced with Titanfall’s Mech vs AI vs Human element. Personally, the game feels a little light on content and available modes right now, which is a little disappointing. Thankfully, we do have confirmation from Respawn’s Co-Founder, Vince Zampella, that additional modes are coming and they won’t be locked away behind paid DLC. So this issue is going to be fixed, which is excellent.

Graphically speaking, Titanfall didn’t blow me away as games like Ryse, Killzone Shadow Fall or inFAMOUS Second Son did. Granted, when you have giant mechs, AI units, and 12 human players running around 15 very diverse and interesting maps, that’s quite all right. The game is so fluid and fast that you probably won’t notice or care anyway. As I mentioned, Titanfall ships with 15 maps out of the box which is great for any shooter and it really helps to keep things feeling fresh. The maps look wonderful, are very diverse in theme and color palette, and also have a ton of nooks and crannies to explore and use.

The biggest change to the traditional first person shooter gameplay style is the addition of parkour elements to the characters. As a Pilot, players can perform moves like double jumps, wall runs, ledge hanging, and the ability to climb. Maps suddenly open up from their traditional roots as you no longer are forced to rush down corridors or find stairs to access higher vantage points. Better yet, pulling off these moves are as simple as tapping A on the controller twice to double jump and running at a wall to run over it. No complex button presses needed. Honestly, it’s striking how much this is a game changing element. It’ll take a couple matches to come to terms with how much freedom you’re given and to really get the hang of the game’s flow. After playing Titanfall for a while and then going back to a more traditional shooter such as Killzone: Shadow Fall, Call of Duty or even Battlefield, the lack of speed and ability to freely move anywhere on a map is quite noticeable. 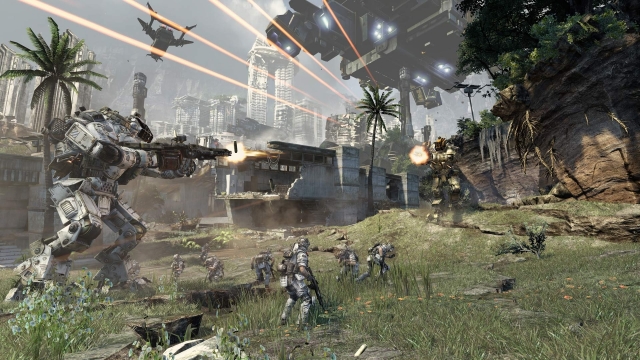 The biggest draw for players however has to be the Titans themselves. These hulking metal beasts come in three flavors (Stryder, Ogre, and Atlas) and again change the way battles unfold. Rather than feeling slow and powerful, these Titans feel more like an extension of your character as the controls don’t change with only jump being replaced by a rechargeable dash move. Even though you’re strapped into this giant killing machine, the delicate balance that Respawn has worked so hard to maintain is miraculously kept in tact. Granted, Pilots should never confront someone in a Titan head on, but even though you may be on foot, it does not diminish your chances for survival or even being able to take them down. Each Pilot is equipped with an Anti-Titan weapon and if you’re feeling lucky, you can actually “rodeo” a Titan, removing a panel and shooting away at it’s AI core. Titan’s have defensive measures for this but it’s an interesting dynamic either way.

People seemed to take issue with the 6v6 human player limitation when it was announced. In all of my time with the game, this has never once been an issue for me. It’s not even really noticeable when you’re in a match as there’s just so much going on you really don’t have time to notice. Plus, with Titans and AI grunts filling out the maps, in addition to 11 other players from yourself, there’s always something to shoot at.

The biggest achievement that Respawn has managed to pull off with Grunts and Titans is the fact that everyone can participate in helping your team win regardless of skill. The AI units are more or less cannon fodder though they serve their roll for reducing Titan build time in addition to granting experience. Advanced players even use them as decoys, blending in until the perfect opportunity to strike appears. Titans are available to everyone instead of being locked away behind some perk or unattainable kill streak reward. If you’re terrible at first person shooters, Titanfall will still reward you and prevent you from getting too frustrated. Make no mistake, this doesn’t mean the game is watered down. It’s still a lightning fast, competitive and more importantly, fun first person shooter. It’s just more welcoming than say Call of Duty. It again speaks to the tight balancing act that Titanfall manages to accomplish between helping along newer players and keeping those skilled players engaged.

Interestingly enough, I haven’t seen many server issues or other gameplay quirks in my time in game. During launch day, I can remember seeing a few oddities such as characters occasionally getting stuck in certain places on a map. Hell, it happened to me even. As I think back, that day was the only time I can remember seeing issues like that, which leads me to believe that Respawn has been really utilizing their ability to silently update the game as detailed in their pre-beta report. It’s a fascinating technique and one that I believe has already paid off whether we know it or not.

There’s absolutely denying that Titanfall is a quality made and fun title. There’s nothing quite like seeing your Titan rocket down from space before thunderously slamming into the ground. It’s a sight and feeling that never gets old. My biggest issue with the game outside of a lackluster story is how limited the content is. Thankfully, even with only five modes to pick from (not including the campaign), the gameplay is so strong that I never got bored. Did it live up to the massive pre-release hype? Well, I’ll leave that one up to you. For me, Titanfall is a game changer for first person shooters and it’ll be interesting to see where Respawn and this franchise go from here.

Titanfall drops in 4.5 titans out of 5

This entry was posted in Review and tagged ea game, games, PC, review, Xbox One. Bookmark the permalink.