It’s fair to say that Ryse: Son of Rome has had a difficult time gaining traction up to its release after officially debuting at Microsoft’s E3 press conference last year. While the game impressed visually, critics and the public seemed concerned about the extensive use of quick time events and also what the combat would play like. From there on Crytek worked to fix and alter many of the criticisms first levied at the game before its eventual launch day release with the Xbox One. Ryse: Son of Rome is set during the reign of Nero in ancient Rome and takes players on a quest for revenge after a barbarian raid on the city. Is Ryse: Son of Rome a worthy contender in the arena or should it be fed to the lions?

Interestingly enough, Ryse decides to tell its story out of order. You start at the end, only to revisit essentially how you got to where you are now. You play Marius Titus, a hero to his fellow soldiers, a proud Roman soldier, and someone who’s willing to risk life and limb to get the job done. While on the outside he simple appears as a dedicated soldier, Marius has a darker goal of extracting revenge on those that killed his family during a barbarian raid on the city. This gives him his drive and ultimately will take us from the crowded streets of Rome to the dense forests of Britannia. For what it’s worth, I was never lost or confused along the way even through out the many twists and turns the story takes.

What’s interesting is that Crytek has adapted actual history to fit their needs with the story. If you’re an absolute history nut then these changes will probably drive you up a wall. If you’re someone who didn’t know that the Colosseum didn’t yet exist under Nero’s reign, then you’ll be okay here. I’ll be covering a bunch of these aspects in a future post so stay tuned!

Upon immediately loading up this game, you’ll be able to tell that this is a next generation game just by the graphics alone. If you need a show piece for what next-gen titles can do, Ryse is more than up to the challenge. The level of detail put on display by Crytek is just staggering. Everything from the textures, to the lighting, to is simply remarkable. These visuals even led me to enjoy the loading screens which cycled through beautiful landscape shots of the level you were currently loading like someone was performing a Powerpoint presentation. Probably the best aspect to the visuals however is how varied everything is. This isn’t a game just centered around the cityscapes of Rome. You’ll be slicing up enemies in a good variety of locations include forests, swamps, beaches, and a host of other interesting locations.

To go along with the amazing graphics is the equally stunning voice acting and animations of the characters themselves. Characters speak and act in very believable ways to the point where it’s almost like you’re watching a movie. Simple gestures like a smirk or other facial animations are clearly visible and when paired with the excellent voice work, you really have something special going on. Combat animations are equally as buttery smooth and well rendered making the chaotic fights even more fun to watch. If this is the future we’re entering then count me as a big fan.

The real knock on Ryse seems be be centered around how the combat is handled. In a word, it’s fairly simplistic when compared to other action games like God of War for example. Marius can utilize four moves during combat: sword strike, shield push, shield block, and a dodge roll. The sword strike and shield push buttons can be held down for a heavy attack version as well. There are no combos to be unlocked here as the main hook to combat is keeping a flow by attacking, dodging, and blocking attacks and then gaining a reward after. When an enemy’s health drops low enough, a skull icon will appear above them, letting you know that you can begin a slow motion, violent and stylish execution attack which will give you a bonus to your focus, XP, damage, or health (based on what you pick). During these executions, the enemy will flash either blue or yellow, instead of those pesky quick time events, letting you know what corresponding button to press. Missing a cue will not result in a failure as the execution will still proceed, though the XP and bonuses you accumulated will be reduced.

Marius also has access to “Focus” which is essentially a way for him to slow down time around him for a few seconds. This technique helps get players out of tricky situations, but be warned, it doesn’t work on boss fights. Focus is gained through combat and I never found myself without it for long.

What’s interesting is that I actually enjoyed the combat in my 6-7 hours with the campaign. Sure, the combat is simple and some may call it repetitive as you’re essentially performing the same actions for each fight. What I found compelling is trying to keep my combat chain going even in the face of increasing enemy numbers. Achieving perfect blocks and strikes and seeing my combo meter rise while trying to avoid getting hit was thrilling. Combat is going to be the main divisive aspect of Ryse as some will love it and some will not care much for it.

Certain sections of the campaign also see Marius take control of his fellow soldiers. Sometimes you’ll be marching towards a group of archers in a testudo formation, commanding archers to fire on a group of enemies, or using a scorpio turret to hold off a wave of enemies. These sections are generally interesting and really help to break up the familiar combat situations. Outside of a couple frustrating turret sections, these alternative forms of combat were a welcomed addition.

Gained experience can be used on a host of unlockables including an insane amount of extra execution moves, increasing your health meter, increasing your focus meter, to increasing the time you’re in focus mode. Levels also hold a number of collectibles to find from scrolls which detail more of the characters and story to vistas which are basically concept art of the level.

For those of you remembering a Kinect only game called Codename: Kingdoms back in 2011, well, things have changed. Ryse is now a full-blown action game controlled through a gamepad as the Kinect features have been diminished to simple voice commands during specific sections of the campaign. Interestingly enough, the game also gives you the option to hold a button instead of using voice commands. Ironically, after being initially shown as a mature Kinect title for the Xbox 360, the end product pretty much removes the need for Kinect all together.

From a gameplay perspective, Ryse is your typical third person action game. Essentially you’re moving from (extremely beautiful) location to location with combat mixed in between. You’re primarily fighting barbarians through the campaign and you’ll probably see only like 7-8 different types. It’s a bit distracting seeing the same type of enemy over and over but at least each class of barbarian has a specific look to it so you can typically guess what type of combat you’re getting into. 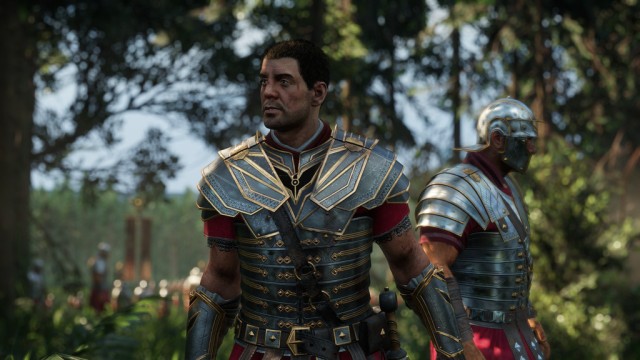 Boss battles help mix up things every now and then, but even then they tend to be pretty straightforward. Typically, the boss character will have a particular move set they use and won’t deviate from it. Once you learn the pattern, the fight becomes more about getting the timing down than any actual skill. This type of boss fight is fine in a game like Mega Man, but not so much for Ryse. Worse still is that Crytek felt the need to artificially extend these fights by throwing a cutscene in between and then giving the boss character full health again, almost like this is “phase 2” of the fight. The fights in general are not strong enough to warrant this mechanic.

Ryse also comes with a multiplayer element as two players work together to defeat various objectives in the Colosseum. The combat remains the same from the campaign, but I have to admit, going through it with a friend does provide an extra spark to the experience. Gold earned in these matches can then be spent on new gear so there’s a light RPG like experience going on here as well.  Prior to each match, you select a God to serve and as such you are granted abilities based on them. So for example, Mars (aka Ares) grants the player extra damage during executions and also the ability to damage all enemies around the player when using focus. The arena constantly shifts around you between each wave with new objectives and landmarks springing up which is pretty cool to see dynamically take place. Being able to combine abilities, defend each other, and work together to keep long combat chains going is something that adds a new twist on the relatively simple combat.

For all of its flaws, I found Ryse: Son of Rome to be a better experience than I was expecting. The campaign is short enough where the repetitive combat really doesn’t outstay its welcome. It tells a good story, features an interesting setting and the graphics are just unreal, really pushing home that you’re playing a true next generation title. In the end though, isn’t the real reason for playing a game to have fun and be entertained? Ryse fit that bill for me and exceeded my expectations based on what the critics would have you believe.

Ryse: Son of Rome gets 4 barbarians out of 5

This entry was posted in Review and tagged games, review, Xbox One. Bookmark the permalink.

5 Responses to Ryse: Son of Rome Review – Glory To Rome