Assassin’s Creed IV: Black Flag Impressions Or How The Franchise Won Me Back

Assassin’s Creed has always held a soft spot in my heart. Bringing historical fiction in line with engaging gameplay is one of the many reasons why I love this franchise. Being able to set foot in places you only read about in history books is just thrilling for me, I mean, where else can you explore Renaissance Italy and bump elbows with the likes of Leonardo da Vinci or Cesare Borgia?

While the first game had some rough patches, I was in love from the moment I climbed up my first tower in Jerusalem. That same affection only increased as the Ezio trilogy kicked off and I was treated to such locales as Rome, Venice, Florence, and Constantinople to name a few. Sure, it hasn’t always been smooth sailing but for a quick history fix, nothing could satisfy me quite like the Assassin’s Creed franchise. Then came Assassin’s Creed III.

While technically not a bad game, to me it just didn’t live up to the pre-release hype. It definitely had issues including a wealth of bugs and glitches in the first couple of weeks. Overall though, I just felt it was missing that spark which the other games featured. Perhaps it was the lead character of Connor Kenway who, after coming from the charismatic Ezio Auditore, just didn’t excite or inspire. Whatever it was, the series was beginning to decline in my eyes. That malaise extended into the initial reveal of Black Flag. Slowly as the year rolled on, Ubisoft began to slowly pull me back through impressive demos, trailers, and impressions from various outlets until I eventually decided to jump back in. After having played the game, I’m extremely glad I did.

Black Flag introduces us to Edward Kenway, a Welshman looking for a better life for him and his wife. After hearing the exploits of pirates and gobs of treasure in the Caribbean, he heads off to strike it rich as a pirate believing it’ll be a quick fix for his money woes. If you’ve been playing along, you may recognize Edward’s last name being the same for ACIII characters Haytham and Connor and this is because he’s actually Haytham’s father/Connor’s Grandfather. Yes, it’s a family affair.

What I find refreshing about the story is that it doesn’t follow the typical themes from previous entries where the lead character goes through some major life event such as the death of Ezio’s family, Altair’s major mistake in the field or Connor’s village being burned to the ground. There’s no Templar/Assassin war going on in Edward’s life, he’s a pirate first and foremost. Interestingly enough, Edward (at least in the first half of the game – more later) is content enough to play both sides in order to get the gold he wants. It’s probably because of this that Edward comes off more engaging and livelier than his grandson. 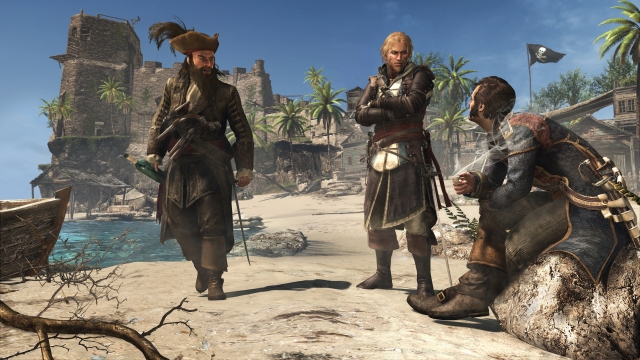 The gameplay will feel familiar to series veterans as it’s still a third person action adventure game so missions based on land will not shock or surprise you. Stealth seems to have been given a bump in priority as you can better use your surroundings to get the jump on your enemies whether whistling from a corner to lure someone in, hiding in shrubs, etc. The blowpipe has also made the transition from Liberation and it works extremely well especially if you’re trying to keep a low profile. Unfortunately, not everything comes up roses here. I’m not sure why, but tedious missions such as eavesdropping conversations and tailing someone for extended periods feel overused and halt the game’s momentum. I’ve never cared much for them anyway, but with Black Flag it seems like you’re performing these actions quite often. Where the game takes a big turn is with the open world Caribbean Sea at your finger tips and the agile Jackdaw ship.

Sailing and naval combat was a new addition to Assassin’s Creed III, but Black Flag takes that element and better refines and improves it as a whole. The ship itself is extremely maneuverable and the weapons are now tied to the camera position. So instead of using a menu system to switch which type of shot you want to use during a hectic fight, the position of your ship will pretty much tell you which shot you’re going to use. For example, aiming at a boat from the front will use the chain shot cannon balls, from the back will launch fire barrels, and the side obviously will be your broadside cannons. Mortars, precision shots, and heavy shots are all mapped to specific buttons on the controller, capping off this much easier system for battling ships on the open water. Not only that, the more your plunder from boats and enemies, the more you can upgrade your ship allowing you to tackle even bigger ships like Frigates and Man Of Wars. Naval combat has never been easier and more fun than in Black Flag. 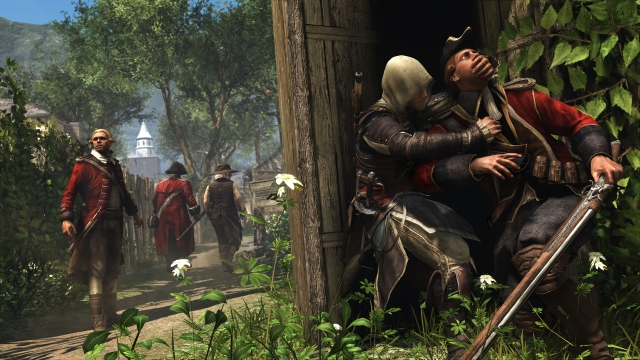 Playing on next generation systems such as the PS4 and Xbox One has been a real treat as well. Visually speaking, the game definitely features a boost with incredibly stunning weather effects, seeing foliage bend and fly in the wind, being able to look out at the impressive draw distance, and also the overall water and wave effects is mightily impressive. Graphics on the whole do seem to be a step up from current gen editions, but it probably won’t floor you like certain other games such as Ryse: Son of Rome or Killzone: Shadow Fall. Still, this is easily the best looking Assassin’s game yet.

I’ve totaled over 14 hours so far in the game to the point where I could probably review this thing and feel confident about it. What’s interesting is that I’m only on sequence 6 of the campaign which represents roughly about half way through. Ridiculous right? That’s how dense and populated this game is and it’s just another bright spot to go along with many others. I tell people that if I end up sailing rather than using the new fast travel system, I can easily spend an hour messing around in the world, it’s that addicting. You could be sailing along and see the allure of a treasure chest on some remote island, decide you want to hunt a whale or shark, pull out a treasure map, or maybe you want to cause chaos and take down other ships. The game constantly teases you with things to explore and accomplish and is also why I haven’t progressed terribly far in the campaign. Black Flag comes with so many wonderful distractions built-in. Embrace the freedom and get lost in it. 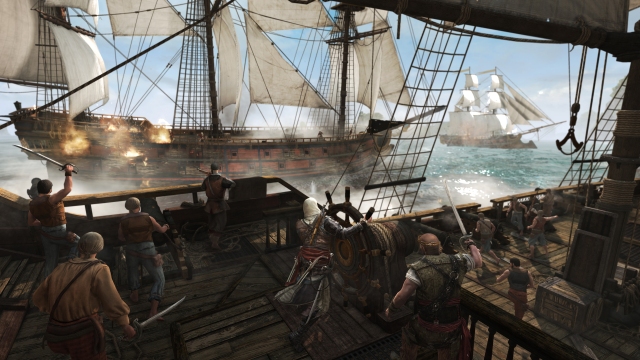 Since Desmond’s arc is now complete after the events of ACIII, I was interested to see where the modern-day story line would go. While Black Flag doesn’t forcefully remove you from the core experience to the modern world nearly as often, I was actually surprised at how much I enjoyed these segments. Sure, they’re not for everyone, but if you’re a fan of the lore and overarching story, there’s a lot to uncover here. You can hack terminals and find hidden messages scattered around the Abstergo Entertainment studio as you slowly become tangled within a corporate espionage plot. Many of you will also be thrilled to know that this segment of the game is purely optional.

Assassin’s Creed IV: Black Flag’s biggest trick is to essentially be a palate cleanser for those of you who were not fond of ACIII. Many of the criticisms I had are corrected here as we’re now given a more engaging lead character, a fantastic soundtrack, and a true open world to explore that’s packed with content and things to do. The experience as a whole has been uplifted and it shows. Thanks for rekindling my love for the franchise, Ubisoft. You did good.

This entry was posted in Opinion and tagged games, Next Gen Systems, Opinion, PC, PS3, PS4, WiiU, Xbox, Xbox One. Bookmark the permalink.

6 Responses to Assassin’s Creed IV: Black Flag Impressions Or How The Franchise Won Me Back