While we may () be seeing more from Borderlands 2 in the future, for now, Gearbox has released the last of the Season Pass content and honestly, they’ve held the best for the very end. Taking place in a fantasy Dungeons & Dragon’s style game, Borderlands has shifted from the typical sci-fi western style and has adopted typical fantasy themes and characters such as orcs, skeletons, knights, and many other elements. It’s a different look for this shooter, but does it work? 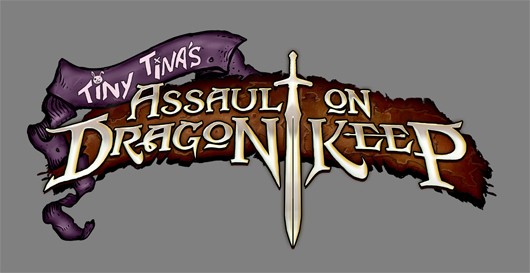 I’ll try to stay as light on spoilers as possible but just be warned that there may be a few waiting below. Does Tiny Tina’s Assault on Dragon Keep score a critical hit or does it need a trip to the medic?

Full review after the jump.

Taking place sometime after the events of the core storyline, Tiny Tina’s Assault on Dragon Keep picks back up with the original Vault Hunters and Tiny Tina sitting around a game of Bunkers and Badasses (Pandora’s version of Dungeons and Dragons). The new group are downstairs “interrogating” a Hyperion spy for information but that really isn’t important in anyway. (MILD SPOILER) Still dealing with the losses of Bloodwing and Roland, the group prepare to play (some more eager than others) in the hopes of helping Tina to cope with loss and death. (END MINOR SPOILER) As a wandering adventurer, your on a quest to save the kidnapped queen and stop the “Handsome Sorceror” from plunging the world into darkness. it’s kind of like the story of Borderlands 2 but filled with familiar fantasy and RPG tropes. Acting as your dungeon master, things get pretty wild with Tina in charge.

Even though the DLC focuses the majority of it’s attention on your character within the game world, Gearbox has shifted gears a bit and added a secondary, more subtle story on top of the narrative dealing with Tina and her friends. I found the overarching story of Tina using the game as a coping mechanism with all of this loss an interesting take on the Borderlands world which is typically help up by humor and crassness. It was definitely interesting to see the game kind of tap into a more serious side especially with a character as unbalanced as Tina. I would have liked to have explored this a bit further, though the big story bits come at the beginning and end of the DLC. It’s a different side to Borderlands, but a welcomed one. With that said, the Dragon Keep on the whole is as filled with references and humor as you’d expect from a typical Borderlands experience, so have no fear. The franchise isn’t going soft on you or anything.

One of the cooler aspects of this DLC are the narration transitions that happens during your time in this world. With Tina in charge as the Dungeon Master (Bunker Master?), she sometimes goes a bit overboard with creating these worlds, puzzles, or monsters to fight. Typically she gets call out about it and will make quick adjustments on the fly. So one minute you walk into a virtual paradise only to have Tina realize that she messed up and quickly flips the script to something more sinister. Being in this world, you see the sun and rainbows shift and fade into night and darkness. It’s a very cool effect but something that seems to be more scripted than truely dynamic. The only time into the game doing this as a result of my actions (and there may be more that I missed) is at a point later in the campaign where I was supposed to collect an object via a ton of floating and moving platforms. Fail a certain number of times and Mordecai will begin to complain forcing Tina to change it and make it easier. I wish there were more of those dynamic shifts in the game as it’s a very interesting effect.

Gearbox typically loads Borderlands DLC with humor and references and thankfully, Dragon Keep is no different. I don’t know if it was intentional but I got a strong The Zombie Island of Dr. Ned vibe from this DLC, perhaps because both take the game into a new theme first with a Halloween type land and now this one into fantasy. I couldn’t help but chuckle to see some subtle and not so subtle references or jabs at pop culture and other games such as a quest based around Dark Souls, ninja looting/trash talking online players, and even a quest based around how female armor in fantasy games is getting pretty skimpy. This DLC is chock full of great writing, voice acting, and quests. There’s plenty to keep you going for quite a while. 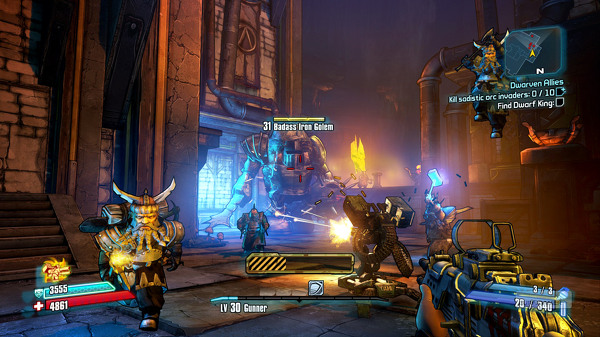 Frankly, I found the complete shift in theme and feel from the core Borderlands experience refreshing. I do really enjoy the main game, but there’s just something really cool about going up against skeletons, orcs and knights. It’s a welcomed change of pace and honestly, I would love for Gearbox to push this idea further either for another expansion or game entirely. There’s a wealth of places they could go with this theme and I would love for them to tap into this potential. The core gameplay mechanics still fit this wonderfully so I couldn’t imagine it being too difficult to incorporate. With that said, I would have loved to have found guns that had a more fantasy feel to them, but I can imagine that may have been tricky to alter an already very strong gun creation system.

Once again, Jesper Kyd has hit another homerun. I feel like I’m a broken record repeating myself when talking about Kyd’s music but honestly, he nailed the theme perfectly. Somehow he managed to blend the almost sci-fi western sounds with those typically heard from a fantasy RPG. For me, his music is easily one of the best parts of the game. His craftsmanship and attention to detail absolutely shines through.

With Borderlands 3 now just a few months away, it’s safe to say that fans are hoping for more content like this or perhaps another DLC pack that resembles this. Even with a few months left before launch, there are plenty of Borderlands 3 deals already out there for gamers to jump on.

If there’s one piece of DLC you absolutely need to have for Borderlands 2, it’s this one by far. Tiny Tina’s Assault on Dragon Keep freshens things up by adding a different feel to the core experience by adding fantasy themes to the mix. The attention to detail with the vending machines made to look like stained glass and the loot boxes now as treasure chests, Gearbox has really gone all out on this one. Coupled with a more personal story for the original vault hunters and an amazing soundtrack, this is one DLC that I didn’t want to put down. Hopefully Gearbox continues to go in this direction with future games because they really nailed this one. Now if you’ll excuse me, it’s time to roll for initiative.

Tiny Tina’s Assault on Dragon Keep gets 5 rolls of the dice, out of 5

This entry was posted in Review and tagged games, PC, PS3, review, Xbox. Bookmark the permalink.