Sometimes it seems like the best games are the ones that sneak up on you and take you by surprise.  That’s what Guacamelee! did to me as I was aware of the title, but didn’t actively “notice” the title until a couple months before it’s release.  I’m not sure how that happened because Metroidvania style action games fit nicely into my wheelhouse.  Thankfully, after picking up the game on Playstation Network, I wasn’t let down and I’m loving my time with it. 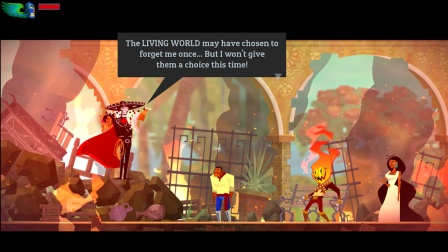 The visual art style is simple yet completely phenomenal with bright colors and fluid animations.  The game is centered around a Mexican “Day of the Dead” inspired theme with the main character (an agave cactus farmer) becoming a sort of Luchador superhero after being killed in the first moments of the game.  It’s from this point that the 2D action platformer kicks off.  In addition to the striking graphics and varying color palate on display, the game’s writing is another fantastic addition.  Humor can be hard to pull off in games, but I found myself laughing quite a bit through the campaign.  Character dialog is well written and humorous.  Same goes for the many references hidden/strewn about as well from other indie games like Castle Crashers, to more established franchises like Super Mario Bros, and other elements like Choozo Statues (Super Metroid Chozo Statues) that give you additional abilities.  It’s really minor but a very cool small detail to the game.

Like a true Metroidvania style game, you are allowed to backtrack and are encouraged to do so as you’ll constantly acquire new abilities to help you get past things that were once in your way.  Colored walls can be broken only by a certain skill so you’ll find yourself backtracking quite a bit in order to find those hidden collectables.  DrinkBox shows off its mastery of this concept as the mechanic of gaining new items is handled well and never becomes overwhelming.  You’ll even be able to morph into a chicken!  Thankfully, an over world map is always available to the player to help determine what you’ve left behind and where to go next.

On the surface, combat feels a bit shallow as many enemies can be felled by a few punches. It’s deceptively simple as the combat system really opens up and becomes almost rewarding once you start unlocking new powers.  Stick with it and you’ll soon be juggling enemies into the air, slamming them back to the ground and then switching dimensions to deal with even more baddies.  It sounds hectic and it can get that way at times, but the game thankfully gives you enough time to get a hold of what you’re doing before unleashing the horde upon you.  With some time, you’ll soon be dishing out 60 hit combos without blinking.

The music is a massive standout for me and one of my favorite things about this game.  It’s catchy memorable, and incorporates elements that really drive the visuals home.  It’s got that Latin America flavor almost like a mariachi band playing along with you.  It’s a wonderful fit and really helps set the mood and tone of the game.

The puzzles aren’t too bad, but some do require almost super human dexterity especially towards the end of the game and if you hope to 100% it.  Don’t mistake that for a negative because overall it’s not.  The game is fair about what it wants you to do, never being too obtuse in what it asks of you.  Still, some of the puzzles may make you rage due to the timing aspects.  The good news here is that you’re instantly revived to the nearest platform so there’s no loading screens or menus you need to deal with.  Make no mistake, this is no reason to avoid the game as it’s a very small aspect.

Overall, I’m really enjoying my time with Guacamelee!  Drinkbox really hit its stride with this Metroidvania inspired title and nailed the additional details such as writing, soundtrack, and overall fun factor.  Grab your mask and jump into the ring, there’s no reason to miss out on this title.

This entry was posted in Opinion and tagged Opinion, PS3, Vita. Bookmark the permalink.