Metro 2033 was a game I was initially interested in but for one reason or another I just never got around to picking it up.  While the game received mixed reviews from critics, it seems to have really resonated with gamers enough that THQ was willing to let 4A have another crack at it.  While THQ isn’t around anymore, Deep Silver picked up this franchise and gave 4A a couple added months to make sure the game is as good as it looks.  I came across the Metro this past weekend at the Penny Arcade Expo eager to give it a try for myself. 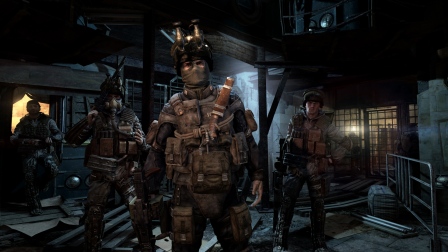 Upon picking up the controller, the first thing that stood out was the environment you’re placed in.  4A has done a great job bringing this bleak and volatile world to life in a very believable way.  The visuals fit the game well and does a great job of pulling you into its world even with the lights and blaring sounds going on around you at a big convention.  The environment goes hand in hand with the fantastic visual design bringing great detail and creating a very unique experience for the player to interact with.  It was creepy, dark, and completely sold me on the post-apocalyptic Russia setting.

I can’t comment on the story really as the demo was more centered around the combat side of things.  Since I was at a loud and noisy convention, I didn’t mind this fact.  The demo felt challenging but fair as Artyom went up against human enemies working in an armored train yard.  You can certainly go in guns blazing, but you’re also able to go silent with stealth kills either with your silenced pistol or sneaking up for a close quarters kill.  Stealth seems to be the better option if you can (you’ll need to work for it a bit) as it saves bullets and enemies won’t call for reinforcements.  Things in this world seem to escalate quickly. 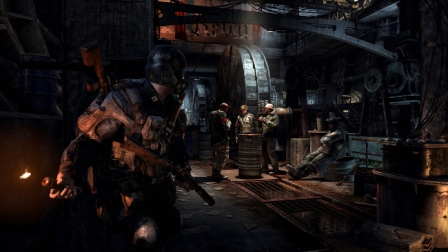 The controls felt good as well even though I didn’t have a controller layout to reference and being too proud to pause the game and look via the options screen with a large group watching me.  While I probably didn’t use half of my abilities/moves in combat, the game was responsive and felt great.  One thing I failed to keep in mind was that in this world, bullets are money.  So while I may have been one of the best soldiers out there, I was also probably the poorest.  Thankfully, the demo didn’t need me to purchase anything because I would have probably been in serious trouble.

Even though the setting may not have been optimal to really get sucked into the game and while I didn’t get a huge amount of time with the title, I was very impressed with what I did play.  I was initially curious about Last Light and after playing it, I’m ready and excited to enter the metro this May.