In an interesting twist, Metro Last Light is including an entirely new game mode as a preorder bonus.  That’s right, between now and March, if you preorder the game, you’ll automatically be upgraded to a Limited Edition which includes a brand new game mode.  I could be wrong, but this very well could be the first time I’ve ever heard of a mode being offered in a limited edition.  So lets take a look at what’s in the limited edition, shall we?

The limited edition version of Metro Last Light will give you access to three additional items.  The big one is Ranger Mode, which is essentially a mode that sets out to completely immerse the player in the world.  So if you’re brave enough to start here, you’ll find the HUD completely gone, less bullets/ammo in the world, and increased damage, both from enemies and yourself.  To help out, the limited edition will also come with additional bullets (used as ammunition and as currency in the game’s world) and a modified rifle, the AKS-74U. 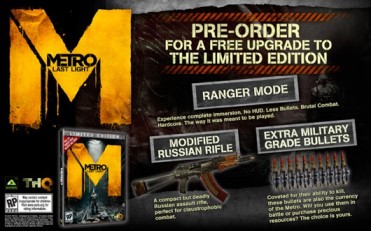 If you don’t feel like venturing outside during these winter months to brave the elements, starting on December 18, you’ll be able to preorder this on the Playstation Network.  Why should you bother?  Well, in addition to the LE version of Last Light, you’ll also be getting Homefront for free and a Metro PSN theme.  Not bad, right?

It’s nice that it’s a free upgrade to a limited edition, so you’re not dropping 20 dollars more to get the bonuses.  Still, if you don’t feel like dropping some cash on a pre-order, I’m sure the items above will eventually be released as DLC down the road.  Metro Last Light hits stores in March, 2013.

This entry was posted in News and tagged news, PC, PS3, Xbox. Bookmark the permalink.