Fans of the First Person Parkour (FPP?) game, Mirror’s Edge have been waiting for quite a while to hear anything about a followup.  Regarded by many as a diamond in the rough, the game didn’t sell as well as EA had hoped it would, but it did manage to find a strong fan base.  While rumors and comments have come out here and there over the years, there has been no definitive ‘yes or no’ on whether DICE plans on returning to the franchise. 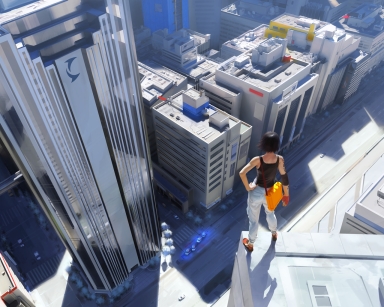 In an effort to dispel the notion that they’re now a Battlefield factory (even with 2 more DLC packs and Battlefield 4 in the pipeline), EA Games VP (and formerly of DICE) Patrick Soderlund mentioned that DICE is made up of 300 people and not all of them are working on Battlefield content as they don’t want to become that Battlefield factory and turn their employees away who want to work on other things.

Not only that, former Battlefield executive producer, Ben Cousins, came out and tweeted that it’s general knowledge in Stockholm that Mirror’s Edge 2 is in production at DICE.  While Cousin’s isn’t with EA anymore, he is based out of Stockholm still and probably does still retain many contacts and friends at DICE and the dev scene there.  While obviously we can’t take this as being 100% confirmed, it is a good sign for those of you who are ready to run the rooftops again.  Just imagine, Mirror’s Edge 2 using the Frostbite engine.  Yeah, sorry, I probably just made the wait that much harder.

This entry was posted in Rumor and tagged games, Rumor. Bookmark the permalink.