I think we can all agree that the SSX franchise has been in a bit of a transitional state lately.  The series hit its stride with Tricky and SSX3 but in more recent years has fallen off the map a bit with such games as the Wii exclusive, SSX Blur.  After taking a break for pretty much exactly 5 years, EA Canada is looking to bring the series back in a big way and also correct some of the wrongs established in the recent years.  With the focus back on big air, crazy tricks, and detailed locations, is SSX a gold medal run or does it careen off the course once more?

SSX features a very loose story of Zoe Payne, Mac Fraiser, Griff Simmons and newcomer Tane Mumea joining forces to conquer the 9 Deadly Descents around the world.  Griff sees an opportunity and gets a little power-hungry abandoning the team, taking his assets with him to do it first.  The three gather more members for the cause and form Team SSX to beat Griff.  Everyone’s favorite disc jockey, DJ Atomika, returns for the ride as well updating the player through cutscenes every now and again on how things are going.

In the single player World Tour mode, you’re taken to each region around the world where a boarder has been assigned to conquer the mountain range.  There’s three mountains to each range starting with the starter zone and moving to the deadly descent.  Once you beat the introduction drop, the snowboarder that’s assigned to that range is featured in comic style cut scenes that introduce them and their motivations for joining Team SSX.  Throughout my playthrough, I found that these comic scenes really didn’t do much for me.  They’re fine but honestly, I didn’t find myself caring all that much.  But you’re not here for story or plot, you’re in it for the gameplay.  Thankfully, it comes up with flying colors in that department.

Most of your favorite characters return for this game including Elise, Zoe, Mac, Kaori, Moby, Psymon, and Eddie including some new characters for you to try out as well.  Each have their strengths, so it’s best to experiment a bit based on the event.  There’s a very light RPG and progression system present for each character so you’re able to customize their outfit, board, equipment, mods, and geotags as you see fit.  You’re able to purchase new items based on the credits you’ve earned and each level you increase gives you access to better items with some being legendary, rare, and unique.  It’s cool, but it’s not as big an element as I was hoping.  Most of the time, you’ll find only junk available in the store or items that just aren’t as good as what you have. 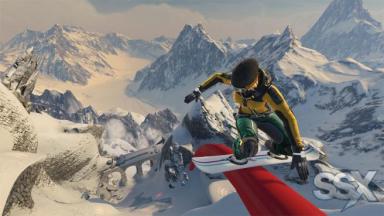 Over the 150 drops available to you, there are three modes you’ll be competing in.  The first two you’ll remember from previous games with “Race It” and “Trick It”.  Race It involves getting to the bottom of the drop faster than the competition, while Trick it dumps the time trial in favor of the highest trick score.  You’ll be pulling some crazy moves even tricking off the helicopter at times.  This is the element that never fails to excite.  Get enough air and you may even send out a shockwave when you land.  It’s a very nifty effect.

The brand new addition this time around are the 9 Deadly Descents.  Each of the mountain ranges in the game features a different theme where you’ll have to adapt the make it to the bottom such as ice, thin air, rocks, or avalanches.  These events change up the formula where it’s just you vs Mother Nature.  For example, the range in South America’s Patagonia is broken up so you’ll need to utilize a wingsuit to help make it over the large gaps.  Antarctica’s Mount Slaughter is so cold that entering shade will slowly make you freeze to death.  You’ll need to equip solar paneling jackets to keep warm when in the sun.  For the most part, these are very creative and a lot of fun.  Sometimes, they can be a bit frustrating due to certain limitations such as not knowing where to go or getting a tough element like darkness where you can’t see.  I never found them so frustrating that I wanted to put my controller through a wall, but for some gamers it just may.

EA used geotagging technology from NASA technology to generate the 28 mountains and 9 real world ranges around the globe.  The big goal here was to open up the world giving players more drops to race down and also remove as many invisible walls as possible.  This makes each drop feel fresh as you’re not going down the same relative path every single time.  Obviously there are better lines to follow than others whether you’re racing or tricking, but ultimately, you’re given the freedom to navigate as you want (within reason).  The mountains may have been generated using real world tech, but to ramp up the fun factor and arcade nature of the game, certain unrealistic elements were added in.  For example, in Siberia, you’ll be pulling huge tricks over abandoned Nuclear Power Plant towers, grinding over massive rails and wires, and finding jumps made from snow drifts on top of fences.  I’ll tell you, there’s nothing quite like grinding on sections of the Great Wall of China with Mount Everest looming over you. 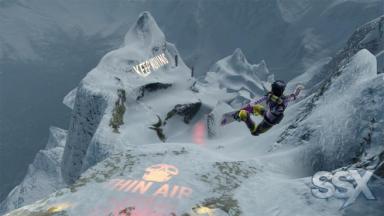 The controls feel great and responsive, just what you’d expect for a game that relies heavily on split second decisions and trick landing.  If you’re a fan of games like Skate that use the right stick for tricks, you’ll find a control scheme for that.  On the flip side, you’re also able to use buttons to pull the moves off if that’s more your style.  There’s also an alternative control scheme for those of you who want an experience closer to the older games in the series.  I stuck with the newer control scheme with the buttons for input and I had no complaints at all.  It all felt very natural and it was easy to get into.

The music is a mix of dubstep, rock, hip-hop, and alternative music and fits very well with the game as a whole.  The best part is that the game uses the Harmony Engine to remix tracks in real-time to what’s happening on the screen.  Get huge air and the track may fade out until you hit the ground or take a spill and the music will shift for a moment until you get back up.  It’s all done on the fly during gameplay and is a very nice touch.  SSX also supports custom soundtracks and the Harmony Engine is also able to remix those on the fly as well.  Another bright spot? Run DMC’s Tricky makes a return when you bust out enough tricks and enter Tricky Mode.

The core of the experience in my opinion lies within the multiplayer sphere.  Outside of the World Tour mode you have Explore and Global Events.  While these aren’t the traditional multiplayer experience you may expect, SSX presents a fresh take on it and provides some addicting gameplay.  The meat of the game lies with Explore mode where you can go to any of the 150 drops in the game and compete against the computer and your friends for leaderboard dominance in all of the events.  Each run will save a ghost which will challenge your friends even when you’re not playing.  You’ll earn credits for your ghost winning.  You’ll also be able to collect and find Geotags which once you find, you’ll be able to drop on any map.  You’ll want to make sure you hide them well because the longer they sit there the more credits and XP you’ll earn.  Finally, badges are a form of challenge system the game throws at you.  Think of them as in-game achievements for doing specific things in the game.  Some of them get pretty tough so you’ll constantly find yourself going to check on how you’re doing.  It can get pretty addictive.

Global Events are a constantly changing and updating system of challenges set up for everyone playing online or just you and your friends.  Essentially, Global Events let you set a drop cost on a mountain where you challenge other riders to beat your score.  Scores are divided into 5 brackets with each section getting a payout of credits.  These can get pretty challenging, especially when open to the entire online population.  New high scores are being set all the time so it certainly inspires creativity and skill.  Global Events don’t last forever so it adds to the tension and the feeling of “Just One More Time”.

RiderNet is basically SSX’s Autolog mode, borrowed from Criterion’s Need for Speed: Hot Pursuit.  Think of it as a social networking as RiderNet updates you and your friends on what is going on.  You’ll be updated with new times that were set, allow you to challenge your friends, and even message them.  The game will provide new friends/rivals for you to challenge and even set up challenges for you based on what your friends are doing.  It’s a very cool feature and one of the driving forces behind this game.

When all is said and done, SSX bring back the fun, arcadey magic back to the series after “misplacing” it in the more recent titles.  The tracks are really well thought out, you’ll be hitting huge air, doing crazy tricks, and with the addition of RiderNet, you’ll be hooked competing with friends and strangers alike.  There’s plenty of content to keep you going for quite a while even if you don’t have many friends playing it along side you.  While a very few of the maps aren’t quite up to snuff, you’re still getting 150 to pick from so it’s excusable.  Multiplayer isn’t traditional so that may turn some people off, but for what’s here, it’s addictive and fun.  Overall, this is a fantastic addition to the series and a welcomed return to form.  It’s the best arcade snowboarding game we’ve had in quite a long time and one that’s been sorely missed this generation.  Welcome back old friend.

SSX gets 4 Avalanches out of 5

This entry was posted in Review and tagged games, PS3, review, Xbox. Bookmark the permalink.