The awards roll on with my pick for the best 360 game of this year.  Unlike the VGAs, my picks are all exclusives to the Xbox.  Though Microsoft may not have released as many exclusive titles as Sony this year, they still managed to deliver quality experiences. So lets take a look.

Forza Motorsport 4
One of the best sim racing games on any platform got even better when released this past October.  Now integrated with over 500 cars and the UK show Top Gear, Forza 4 introduces a new mode called Autovista which essentially lets you drool over the cars.  The career mode has gotten revamped along with an AI system which will adapt to how you drive.  Kinect offers motion controls along with a head tracking feature letting you look around corners from the cockpit and also interact with the cars in Autovista mode.  A new lighting system and refined engine grants impeccably detailed and stunningly realistic cars.  Simulation racers don’t get much better than this.

Gears of War 3
The swan song of Epic’s trilogy with Delta Squad, Gears of War 3 gives players everything and the kitchen sink.  The campaign is quite possibly the strongest in the series, a robust multiplayer component including an expanded Horde mode and an all new Beast mode which lets players swap roles and become the Locust bent on destroying the COGs.  The game’s delay has allowed Epic to refine the experience and polish up the little details including offering players a beta in the spring to make sure this competitive multiplayer is the best of the series.  Dedicated servers also help.  With new content begin constantly rolled out through Weekend Events or DLC, there’s something here for everyone to enjoy.

The Gunstringer
Developed by the creative guys over at Twisted Pixel especially for Kinect, Gunstringer has you controlling an undead cowboy marionette as he seeks revenge for those responsible for his death.  The motion controls for this on rails third person shooter/action game feel great, are responsive and the story features the usual Twisted Pixel humor found in their other downloadable titles.  The best part though is that you’re actually playing a stage hand controlling the puppet so taking hits or doing good will result in cheers and/or jeers from the watching audience.  Objects in the environment looks like stage props made from common materials like cardboard and held together by tape for example.  It’s a very cool setup to a very cool game.

Halo: Combat Evolved Anniversary
With Bungie off of Halo doing other things, 343 Industries stepped in and decided to remake the very first Halo and what better time to release it than 10 years after the original.  While the core gameplay and story remain the same, 343 has added in a brand new engine which can be switched on or off whenever you want.  If you want it off, you can enjoy the sights from the original game, or by flipping it on you’ll see the game running in the powerful Reach engine all at the flick of a button.  In addition, 343 has added in Kinect voice recognition for grenade throwing and reloading, added in 3D TV support, remade 7 classic multiplayer maps from the original game, and added in Firefight maps.

Dance Central 2
A sequel to perhaps the Kinect’s showpiece game adds in everything people wanted.  New songs, a more robust campaign mode, and the biggest addition, the ability to have 2 players dance side by side.  With a very accurate body reading system, and the ability to import the entire track list from the first game, Dance Central’s greatest strength lies in the fact that it gives off an extremely fun party vibe.  Try it out, playing this game in front of people will indeed attract a crowd.

So which game rises above?  The winner awaits you below:

For me, this really wasn’t any contest.  While the other games on this list are great in their own right, Gears of War 3 just rises to another level.  Originally planned for an April release, Microsoft seemingly up and delayed the game to a fall release much to the surprise of…well…everyone.  In retrospect, this might have been the smartest move as it allowed Epic even more time to fine tune and polish the experience even more.  Better yet, they were able to hold a public beta test to make sure that the multiplayer was as good as it could have been.  Gears of War 3 succeeds on every level, providing a very satisfying conclusion to Delta Squad’s story and providing a wealth of content with a completely renovated Horde Mode, a fulfilling and finely tuned multiplayer mode, and a fun addition with Beast Mode.  Tack on arcade mode and the fact you can co-op the campaign with 4 people and you have a recipe for success. 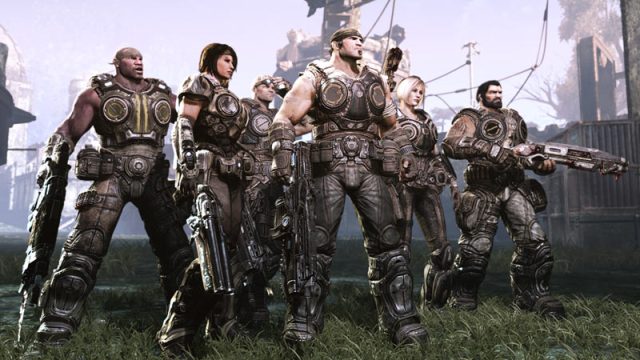 This entry was posted in Gamer Crash Awards and tagged games, Xbox. Bookmark the permalink.